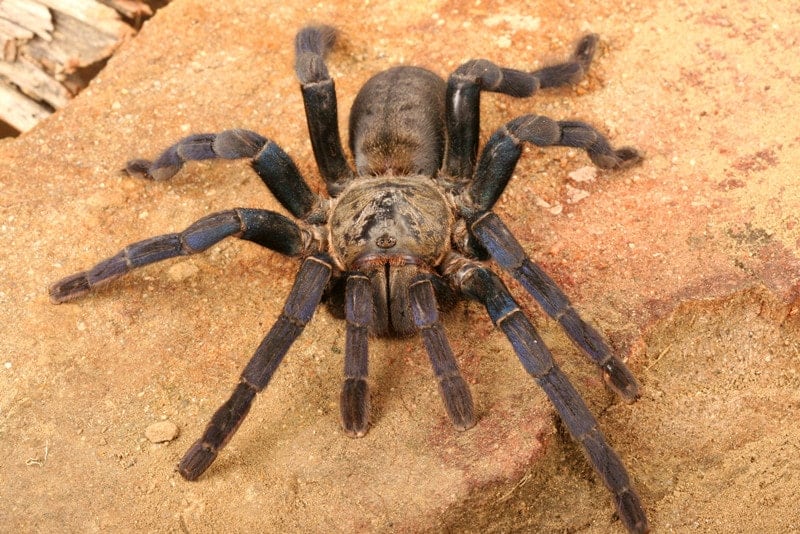 Cobalt Blue Tarantulas are a species native to Thailand, yet found burrowing and hunting all over Southeast Asia.

Their most salient feature for pet owners is their utterly spell-binding blue color which cloak the spider’s underbelly, legs and abdomen.

Read on to read common questions asked about raising a Cobalt Blue Tarantula as a pet in general, as well as more specific questions appertaining to its care.

While the definition of a “good pet” may be subjective, the popularity of these remarkably bright blue spiders may attest that there is something universal about their traits or behaviors that speak to their appeal as an arachnid pet.

Due to all the reasons listed below, the raising of a Cobalt Blue Tarantula is best reserved for the hands of an experienced tarantula owner.

Cobalt Blue Tarantulas are burrowers, so they aren’t really active and will spend most of their time hiding underneath their burrows. However, because of this these tarantulas don’t need to be fed often, either, having a slow arachnid metabolism.

Do keep in mind that due to the reclusive nature of burrowers, as well as its tendency to bite when being handled will mean that it is not recommended for new tarantula owners expecting to showcase their pet crawling on the palm of their hand.

Due to minimal maintenance and handling, they pose little to no danger to their owners. Their bite, although quite painful, is not venomous enough to seriously hurt humans, although it is meant to paralyze its smaller prey.

One of the most unique aspects of the Cobalt Blue would be its sharp predatory instincts. It’s considered as possessing one of the more aggressive personalities of captive tarantula pets available, and while this may be a turn off to new owners, witnessing the intrigue and mystique of a Cobalt Blue in action is quite alluring to others.

How Long Does a Cobalt Blue Tarantula Live?

The answer to this question is two-legged: the female lives twice as long as the male Cobalt Blue Tarantula.

While some say the latter (male) lives an average of 5 to 8 years in captivity, other reports say they can last from a decade to 12 years, whereas the female can live from 20 to a whopping 24 years. That’s longer than most dogs and cats!

How Big Do Cobalt Blue Tarantulas Get?

The Cobalt Blue Tarantula is considered a “medium-sized” tarantula, which grow up to 5 inches (almost 13 cm) in leg-span length. The females grow to become slightly larger than the males.

During a process called “molting,” in which the tarantula sheds its exoskeletal layer, its organs also adjust in size to be bigger every molt, and it’ll regrow any limbs lost.

One of the most fascinating aspects of this animal is its coloring. Under the naked eye from a distance (and directly above), it appears to be black. However, under certain lighting and angles, it appears an iridescent, ethereal blue that earned the arachnid its name.

To this day, scientists are unsure why the Cobalt Blue Tarantula, along with its blue-color sharing cousins are colored the way they are, in regards to its true purpose to either attract a same-species mate or repel predators.

How Much Does a Cobalt Blue Tarantula Cost?

Although tarantula species pets in general can cost anywhere from 20$ to 200$, the current average online price of the Cobalt Blue Tarantula is around 60 USD.

Part of the reason for this cost is to account for the shipping of the arachnoid overseas from Asia. While the female tarantula may cost longer due to its longer life span, the fact that it fades in color may result in both sexes being equal in price from sellers.

Cobalt Blue Tarantulas are not only one of the biggest and most beautiful of tarantulas, but also noted for being one of the most aggressive. They have a “moody” temperament in that touching or alerting their presence will cause them to be on guard, brandishing fangs and preparing to defend.

Their bites, which can result in severe muscle cramps or inflammation, otherwise pose no serious threat to humans. Thus it is best to observe these pets’ magnificence through its glass walls or above.

Why a pet being labeled as having an aggressive personality might be a deterrent to potential onlookers, the Cobalt Blue Tarantula is expected to be aggressive. By regularly feeding it live prey, it is meant to continuously hone and preserve its hunting instincts.

Stress, however, that is disparate with normal, healthy aggression in tarantulas. To curb stress, providing lots of foliage/bedding, or other material within the terrarium to mimic its natural environment will help ease the pet’s temper slightly.

The Cobalt Blue Tarantula is frequently imported from Southern Asia for its popularity as a pet, and are not endangered as a species.

However, there is evidence to suggest that their population numbers are dropping due to increased loss of habitat.

Its cousins sharing its genus Cyriopagopus, the Poecilotheria metallica, is critically endangered.

Can You Handle a Cobalt Blue Tarantula?

Due to its aggressive temperament, as well as its painful (but non-deadly) bite, it’s best for owners to avoid handling their Tarantula pet, at least not with their bare hands (wearing bite-proof gloves can rectify this easily).

Due to its hunter-like nature it will try to bite upon contact, therefore its best to leave your pet alone. They are blindingly fast, too, so best be careful during feeding or tank-maintenance sessions.

Removal of a pet entails gentle coaxing with forceps out of its lair, redirecting it out somewhere else and/or then placing the animal in somewhere easy to recapture such as a bath or other spare tank.

The Cobalt Blue Tarantula is famous for its aggressive temperament, and is one of the species most likely to bite in response to being handled, so watch your fingers!

The minimal gallon size for a tank would be 5 gallons, although a tank of about 10 gallons is preferrable.

Material used for the spider to dig and burrow in could be from specific pet-brand material to peat moss or most simply, even soil used for everyday potting.

There’s little need for adding elaborate decorations as the Cobalt Blue will tend to rearrange everything to its own liking and cover much of the area of the cage and its burrow with webbing, rendering much of your handiwork (and the pet itself) unseen.

Do not attempt to remove what you deem to be visual obstructions near the burrow of the pet, as this can disturb the Tarantula during the molting process or agitate its stress levels.

Food & Water (What to Eat, How Much to Feed, How Often to Feed?)

The most common food for Tarantulas would be crickets, which can be bought cheaply and abundantly in store and online retainers. Owners have the option to introduce variety into their pet’s palette, by introducing the occasional mealworm or cockroach, or even baby mice.

Feeding time is not often, ranging from 2 to 3 times a week for adults, with only one individual insect/other invertebrate being necessary to satisfy a Cobalt Blue per feeding. If you have younger Cobalt Blues it may be necessary to feed them once every two days since they are still developing.

Tarantulas acquire almost all their moisture from their food, and thus a cup of water may be unnecessary, although the Cobalt Blue species originates from a tropical/warm climate and thus requires more water than most tarantula species (see under “humidity”).

Over-feeding is simply not a concern with tarantulas since your pet will eat its fill of its own discretion. However, because of this is may leave its uneaten food lying around the tank, for which the owner will have to sweep up during maintenance.

Most Tarantulas will thrive well at room temperature. However, a temperature of 25 degrees Celcius (77 degrees Fahrenheit) can fluctuate roughly around this zone.

As stated earlier, since most Tarantulas can thrive at room temperature, the Cobalt Blue Tarantula won’t require any special heating devices or services. If you must, a simple reptile thermometer can help you monitor the temperature.

Cobalt Blue Tarantulas originate from a humid environment, having come from the jungles of Southeast Asia. Regularly spraying the tank or terrarium lightly with water can easily emulate their home habitat and keep the pet happy.

Having a hygrometer is recommended in order to monitor humidity in the same way a thermometer would with temperature, which should aim for an area around 80-90% humidity.

Humidity becomes much more important once the tarantula begins molting, during which it will stop eating and cover up the entrance to its burrow. Stop feeding and spray water to induce humidity that will assist in the molting process.

Almost all Tarantula species loathe and therefore do not need light. This makes sense since they are nocturnal creatures, and therefore are more active and hunt by night time.

If you absolutely must provide a light for your pet, a red-colored lamp will do, although this may affect how the unique coloring of your pet would appear to you.

While many Cobalt Blue Tarantulas are purchased at adult-size, thereby lowering their cost, the breeding of their spiderlings have steadily become more common in occurrence.

Cobalt Blue Tarantulas engage in a complex mating ritual involving dancing or tapping with their forelegs. The male initiates the tapping and vibrates its body as it approaches the female, and if the female is receptive to his advances will leave its burrow to invite the male inside to mate.

After the deed is done, the female will lay eggs in the burrow, for which she may care for personally wrapped in a sac. A female can lay about 100 to 10,000 eggs at any one time. Due to the aggressive nature of the species, even the spiderlings are known to attack upon being handled.

While it may be unfortunate, the Female Cobalt Blue Tarantulas may even rarely kill and eat the male tarantula after mating! If you are concerned for the loss of an adult male, you might want to think twice before introducing a pair for mating.

Here are some of our favorite products

Thank you for reading this post. We hope you found it helpful as you raise your pet. Here are some products we use as a pet owner that We hope you’ll also find helpful.

Reptile Supplies: We recommend xyzreptiles.They offer Frozen Rodents, Lights And Heating, Habitat, Terrariums, Bedding and Substrates, Snake Hides, Reptile food. They offer a 100% live arrival guarantee on all of their animals. They also guarantee the sex of the animal to match what was stated at the time the animal was purchased.

Here are some coupon codes: