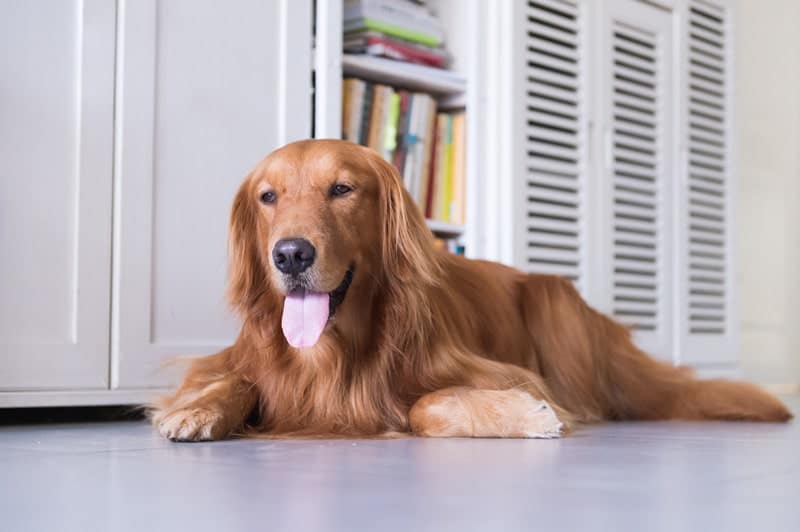 Dogs, one of the most popular animals on the planet. They tend to be man’s best friend, or your worst enemy, depending on the situation. Dogs come in many breeds that are intriguing to say the least, but one of the more responsive dogs that exist today is the Red Golden Retriever.

The Red Gold Retriever is common animals that can be used for many reasons, but most commonly as a pet. They tend to have great attributes such as obedient, protective, yet still docile and submissive to their owner or caretaker.

The Red Gold Retriever gives you the best of both worlds when it comes to having a dog; but of course, there is still more to learn. Are you thinking of having a dog around? If so, keep reading to learn more about Red Golden Retrievers.

Can A Golden Retriever Be Red?

When you hear “red golden retriever”, you may instantly think of a dog that has red hair; this is only some of the case when it comes to this breed of dog.

A Red Golden Retriever has the capacity to have a hint of red in the coat of their fur, but is still more mahogany brown at the base of the dogs fur. The defining red hue from the dog’s body is actually a feature from the past.

Allow me to explain.

So, in essence, yes, a Golden Retriever can be “red”; but just note that the red tint is not that heavy for the most part, and most of its genetic makeup is that of the original Golden Retriever.

Did you know that the bigger a dog is, the faster it dies?

This is because bigger dogs live their lives doing big and fast activities like running for long periods of time, defending territories, which gives them a faster rate of growth, which ultimately leads to a faster rate of death.

Red Golden Retrievers, unfortunately, fit this category, as well as it big dog counter parts. But not to fear, because this scenario won’t happen for years to come, because the lifespan of a Red Golden retriever is approximately 10 to 12 years long.

This is the common age for Red Golden Retriever, and mostly comes down to their genetics.

There have been rare cases in which a Red Golden Retriever has lived up to 19 years, but many other factors such as diet, activity, and how the dog is used and cared for play heavy roles in the ultimate lifespan.

In any case, when you are connecting with Red Golden Retriever, just know that the time you share will unfortunately fade after about a decade;  but it could be one of the best decades of your life, with one of your best furry friends!

How Big Do Red Golden Retrievers Get?

The size of a Red Golden Retriever is pretty consistent across the breed, and is continuous until they hit adulthood.

Once a Red Golden Retriever becomes a full grown dog, they are then considered a “large dog”, and can range anywhere between 37 to 42 inches in length, depending on the sex of the dog, and can be as tall as 2 to 2 ½ feet tall (Withers Height).

Even as a fully grown dog, the smallest Red Golden Retriever can was as little as 50 pounds, while being 75 pounds on the heavier end.

Males are usually bigger and heavier than females, but only slightly. A male can weigh between 64 and 70 pounds on average, while the female is a slightly more subtle 60 to 71 pounds.

In both cases, this is a pretty big dog, and will grow fast to reach these weight height and length dynamics.

This is due to their genetic makeup, which entails that since their fur is what keeps them warm, their body must produce more of it in order to preserve the life of the dog, on a biological basis.

So the dog’s body will continuously create more new hair within the dog’s body, which will eventually push out the old hair, causing it to fall from the body of the lovable dog, right onto your floor.

In order to maintain the shedding of this friendly dog, simply brush its hair once a day -preferably outside- to get rid of loose hairs that are beginning to shed away.

This will reduce the amount of shedding that occurs, while at the same time keep the coat of your dog shiny, smooth, and healthy.

What Is the Difference Between A Red Retriever And A Golden Retriever? 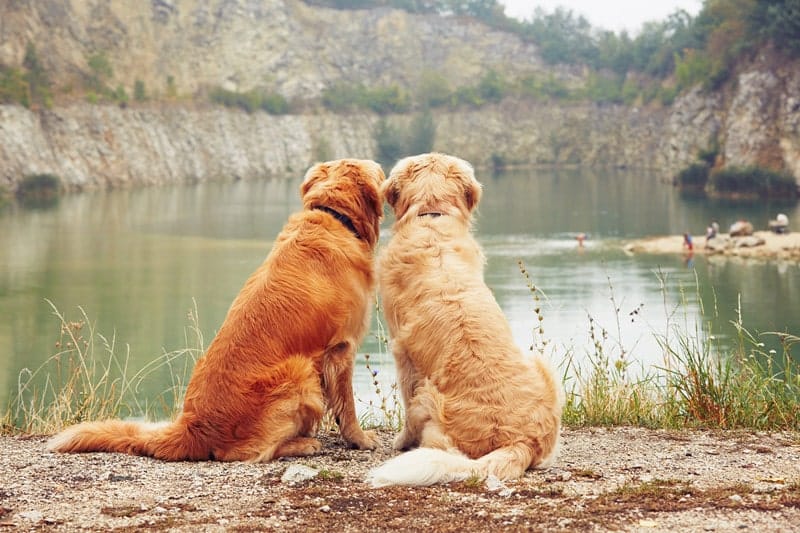 As the names imply, Red Retrievers can have a simple hue of red tint to their fur, or can be a solid reddish-burgundy color.

A Golden Retrievers fur can be a light yellow tint, to a full yellow or golden color.

These colors are based on the genetic makeup of each dog, any type of breeding and mixing history with other dogs, as well as the amount of pigment that they have within their body and hair cells.

Even though these dogs may have different shades and colors, they are still the same dog of the same breed. When it comes to the personality, size, and other attributes of these dogs, it remains consistent, regardless of color.

Red Golden Retrievers have one of the best temperaments of any dog species!

Let’s begin with their personality traits. They have great hearing, and are capable of learning your voice, and tones in which you speak fairly quickly; making these furry friends fast learners!

They also are phenomenal work dogs for when you are out in the field cultivating, or simply doing chores around the house, they’ll be willing to help out.

Red Golden Retrievers have intelligent and expressive animals, so it’s easy to know what’s going on with them, which makes them much easier to take care of. They love interacting with humans, and get along well with other dogs, so no need to worry about a fight while at the dog park.

With these awesome characteristics, they can also be a shortcoming of the Red Golden Retrievers, as they enjoy interaction so much, that they crave it a lot, meaning that they require substantial attention, or they will sulk and expressively be sad for a while.

All-in-all, Red Golden Retrievers have a great personality and temperament!

Food And Water (What To Feed And How Often To Feed)

Despite the misconception, within nature, dogs are omnivores, and are capable of eating just about whatever they can sink their teeth into, whether it be grass or a squirrel!

With that being said, there is no special diet that a Red Golden Retriever must be on; however, their food should be of a certain standard.

Red Golden Retrievers eat frequently as pups, so feeding them about twice a day, possibly with a small healthy treat will be optimal. As adults, they eat less frequently, averaging about one to two meals per day.

Their food should consist of a significant protein source, like meat, for muscle building, a small variety of whole grains and prebiotics for proper digestion and a healthy gut; healthy fats that contain omega-3, as well as finely chopped vegetation.

Their water should be clean, and change after every finished drinking session.

Fun Fact: contrary to popular belief, Retrievers love fruits like apples and bananas, and make for a great and healthy snack!

Red Golden Retrievers are prone to profuse shedding, as well as being very physically active both indoors and outdoors.

Because of the active lifestyle that they lead, Red Golden Retrievers will definitely need a bath, and should be initiated at least once per month.

Now, logic tells us that it’s ok to bathe the dog when it smells, or is noticeably dirty; however, bathing too often will strip the dogs’ fur of its natural oils, which means their fur could lose their sheen and become more dry and brittle if bathed too often.

The best amount of baths that the body of Red Retriever can handle, without loss of coat or shine, is one to two per month, on average. At this pace, your dog will stay – and smell – clean and fresh, and will retain most of its gleam and sheen.

The fur of a Red Golden Retriever can come in many styles, from short to medium to long, shaggy! This is a cool situation while rubbing and petting them, but can turn ugly over time if the necessary and proper grooming care isn’t initiated.

To keep the fur of a Red Golden Retriever optimally healthy, it’s best to brush out their hair if it’s short; this will keep the fur clean and bug-free.

If their hair isn’t combed out frequently, it will create knots and mats within it. So for medium and longer fur, a great option is to comb out the hair.

Using a comb will allow you do dig deeper into the dogs’ fur for better entanglement and separations of hairs, with little-to-no discomfort for the dog; they actually enjoy the interaction! Clippering and trims may also be necessary to keep the length of the dog hair within a workable grooming range. Oh, and don’t forget to trim and clean the hair around the genitals of the dog, so that their private will stay sanitary, without spreading to the surrounding fur.

Sports are a great way for a Red Golden Retriever to be engaged and stay active.

It provides them with the opportunity to run as fast as they can in order to release the substantial amount of energy that they have within them.

Some key outdoor activities that will allow for this to happen can be throwing and catching a frisbee with the intelligent dog; while others include anything with a ball.

Pushing around a soccer ball, releasing and searching for a tennis ball, teaching them to hit a volleyball with their nose, and even basketball could be a favorite of theirs!

Running, or a light jog, is always a simple and healthy sport to do with Red Retrievers, and so is simply taking them for a walk, or jostling around in the backyard for some good ole fashion rough-and-tumble play.

All of these options are optimal at any time of the day, and it is sure to create and cultivate a close-knit relationship with a Red Golden Retriever.

Due to their active lifestyle, as well as diet and environment factors, Red Golden Retrievers are known to have health issues once they hit mature adult age.

Some of these ailments can present in the form of a disease, or as a localized problem within the body of the dog. Red Golden Retriever health problems can include:

Processed grains, starchy vegetables, and fruit with fructose are certain foods that can become the basis of a Red Golden Retrievers’ health problems, so it’s best to opt for whole foods that are fresh.

Also, plants that have been treated with pesticides are also a common way to induce health risk into the dogs’ life, so keep your furry and connective companion away from this factor as well.

Simply make sure that they eat a well-balanced diet, paired with plenty of exercise, and a Red Golden Retriever will be able to live a long, healthy, and fun life.

The Blue-crowned Conure gained popularity after starring in the 1998 movie “Paulie.” Not many birds can boast a successful silver screen appearance. If you are a fan of intelligent birds,...

Parakeets are a simple bird that love to be in the company of their feather-adorned companions and their caretakers. Lineolated parakeets fit this description as well. They are a...