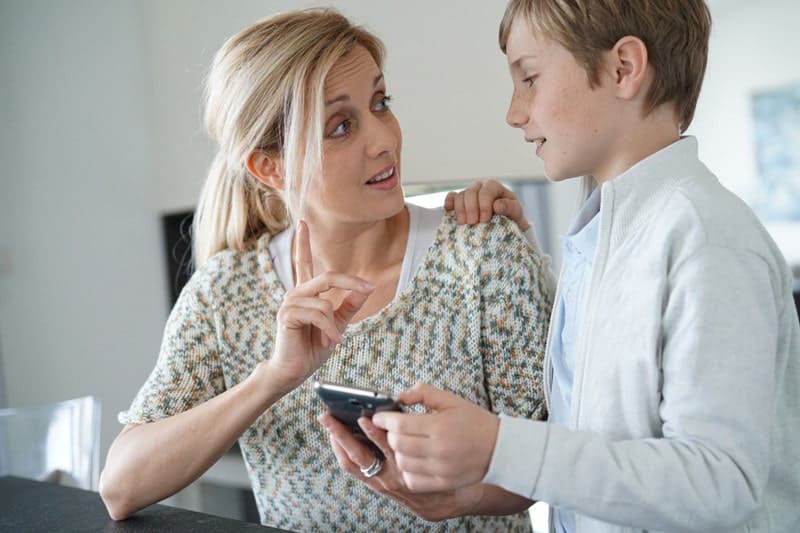 Knowing when to give your child a smartphone, or any type of mobile phone, can be tricky. Should a 10-year-old child have a smartphone, for example? Or should you wait until a later age before introducing that luxury and responsibility? You’ll need to wade through a number of considerations before deciding what’s best for your child and family.

Sometime during middle school years (typically ranging from ages 10-13) seems to be the right time for many families to offer their child a smartphone, and that way they have time to get used to using its features comfortably before entering high school.

Should you give a smartphone to a 10-year-old? Nearly half of all 10-12 year olds have a smartphone. The best determination for when to give your child a smartphone is really less dependent on their age and more about the child’s level of maturity and competency.

Helpful considerations include: weighing the pros and cons of having a smartphone; your child’s level of overall maturity and how s/he handles responsibility; does your child often lose or damage things easily?; whether or not s/he has a grasp of digital safety; and more. There’s a lot to consider and no right or wrong answer. Additional considerations are listed below to help gain a better understanding.

I’ve worked in child development environments both before smartphones were the norm and after they became common products for kids. It’s been a long learning curve to know what you need to learn as a parent in order to best guide your child with his or her own smartphone – to keep your child safe, responsible, and well-balanced. And it all starts with when to introduce a smartphone in the first place.

Keep reading below for helpful guidance for parents and guardians regarding smartphones for kids.

Considerations Regarding Smartphones for Kids Ages 10-12

There are numerous pros and cons when considering smartphones for kids ages 10-12.  Here’s a list of some of the most common that can help steer you in the right direction.

Additional concerns to be considered and discussed with your child:

What Is the Best Age to Give a Child a Smartphone?

Age really isn’t the best way to decide the best time to give your child a smartphone. Consider all of the bullet points above, and then weigh those considerations with how well you think your child can manage each point of consideration. It’s really a judgement call.

While many kids do start to use smartphone in middle school (roughly half of kids between the age of 10-12), a large group of parents choose to wait until later. Many parents actually prefer to wait until their child is a teenager to give their first smartphone.

In fact, Bill Gates and James Steyer (CEO of Common Sense Media) are proponents of waiting until a child is around 14 years old (after they have learned the value of face-to-face communication). While it may be tough for parents to hold out this long, it’s a tough love kind of thing. The longer parents wait before introducing a smartphone into their child’s world, the more engaged your child will be in their world (outside of digital access).

Balancing Screen Time with Other Activities

When my daughter was younger (prior to middle school), I encouraged very limited screen time (regarding TV, computers, etc.). So in these years before she had a smartphone, she had already learned to enjoy spending her time reading, being creative artistically, playing piano, and other hands-on types of activities.

Now that she has a smartphone, while admittedly she does spend a fair amount of time on her phone, she is also used to balancing her “media time” with these other pursuits. Her friends can’t understand why she isn’t “glued to her phone” 24/7, but it’s simply because she has other things on her mind (thankfully!)

So helping your child to find that balance of screen-time versus hands-on activities early on is truly helpful.

What can also sometimes be tough for parents is understanding the difference between wanting a phone and needing one. If your child says s/he needs a phone because all their peers have one, that’s not truly a need – it’s a “want.” Yet, the sense of not feeling ostracized by peers is also of importance and is a fair consideration, whether in middle school or high school.

At any appropriate age, phones can be most helpful in emergencies and just for staying in touch when your child is away from home. But the social aspects are important, as well – both in positive and negative ways. Your child will have easier access to networking socially with the use of a smartphone, and especially if your child is more on the introverted side, connecting by text or instant messenger can be more comfortable ways to engage with peers.

But with that easier digital access comes the possibilities of emotional distress when schoolmates or peers are acting out through social media apps or group texts. It can be more detrimental than acting out in person since group messages and social media outlets can reach larger groups of people than in-person groups typically do.

Another consideration is that your child’s network of peers will have near 24/7 access, and is your child ready to be so suddenly “on call”?  It can be quite stressful and takes time and maturity to learn how to manage the difference between being digitally “connected” or “disconnected.”

S/he will need to learn how to balance being available some times versus taking time off from phone access other times, even when friends or peers have expectations that aren’t being met in terms of how often your child is available for conversations via various apps.

Should Kids Under the Age of 10 Have a Smartphone?

Generally speaking, it depends on the maturity level of the child. If your child is responsible and mature enough to handle having a phone, then whether s/he is 9 or 12 or 14 doesn’t much matter.

The best advice? Consider the pros and cons of your child having a phone and then use your best judgement, while keeping your particular child’s habits and behavior in mind.

Speaking for the average child under the age of 10, the issues of most concern would be:

One tactic is to start a younger child with a basic flip phone. Offer that style phone for a while to see how it goes, and then “graduate” to a smartphone. That way, your child can get used to the idea of caring for a phone, when to use it, when not to use it, etc.

And, you have the extra comfort of knowing you can keep in touch when s/he is away from home, with a level of comfort that your child – at this point –has access to only phone and text features.

Helping Kids to Stay Safe with their Smartphone Usage

There are a number of websites that can offer information to help keep your child safe with his/her smartphone. For example, Connect Safely has created a Family Contract for Smartphone Use, which focuses mainly on safety. Common Sense Media has a Family Media Agreement that both the child and parent read and sign, which covers everything from appropriate usage to safety concerns.

A number of applications are on the market to help monitor your child’s safety with parental controls. I found those to be most helpful when my child was on the younger spectrum, but seemed to be too limiting (and honestly a little cumbersome) as by daughter became older.

In addition to safety apps/parental controls, discussions with your child are potentially far more helpful in understanding your child’s behavior and things s/he’s exposed to when using their smartphone. Discussing smartphone usage should be an ongoing topic of conversation on a regular basis.

As your child grows, interests change, popular apps change, and situations your child is exposed to changes. So the best way to keep up with these changes is an open and honest line of communication with your child.

The best advice is to ask your child questions about his or her phone usage and experiences (What apps do they use? Which are favorites and why? Who do they connect with? What are favorite topics of conversations? Do they receive any weird or uncomfortable messages? Do they know what cyber bullying is? Do they know of any kids who are mean to others online? If so, what do they do? What do they think they should do?). And install apps that track browser history so that you can check it every so often.

Cell Phone Radiation Effects and Are They Safe for Kids?

Scientists disagree about this topic. It’s difficult to study because effects of radiation can take decades to unfold and see clear results. Since the higher prevalence of kids using cell phones is relatively new, research is lacking to offer definitive answers. It’s also difficult to study effects of cell phone usage because its usage is so widespread, so comparing low-usage effects versus higher-usage effects is challenging.

Here are some recommendations to keep your kids safe when using cell phones: