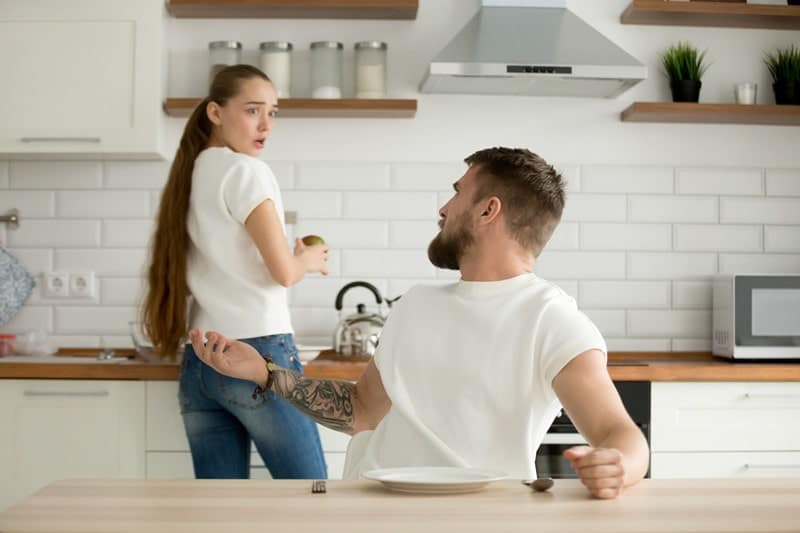 An angry husband can be troublesome in marriage. You would not want your partner to be irritated and negative in every situation that you have as a married couple. You want to keep the environment in your house as happy and as positive as possible.

No words can ever change an angry and negative husband—but your actions can. You should start doing things differently in order to have a positive effect on the attitude of your husband.

Marriage is all about exerting as much effort as possible to fix issues and resolve conflicts. You just have to keep faith that everything will be solved in its proper time. Your husband will become more and more the man and the leader of the household that you want him to be. Here are some strategies when husband is always angry and negative.

Stop and Don’t Escalate the ​Situation.

In times when your husband is furious, you don’t have to feed his anger and add to his rage. You should calm him down by calming yourself down. Don’t panic and don’t get irritated yourself. Be the voice of reason for him.

Try to understand his reactions to particular situations. Does he like being soothed during these kinds of conditions? Does he want a massage afterward? Or does he want to eat after being angry? Think of ways to defuse his annoyance. Let your actions be the solution to his anger problems.

If your husband is in the state of rage, don’t support him in this condition. Unconsciously, his mind may be telling him that it is okay to feel this way because his wife assists him in these situations.

Instead, you should be neutral about it. Don’t say, “Yes, you have every right to be angry. You can do whatever you need to be furious.” Sometimes, it is best not to say anything. Let him figure things out on his own. His own consciousness may tell him that he is unjustifiably angry again. This will lead him to stop and return to his composed mental state.

Yes, you do not like your husband being angry and negative. Yes, you don’t want to spend the rest of your life with a person who is always furious over everything. But this is your husband we are talking about. This is not just any random person, and you can’t just leave in the room the moment he goes into one of his rants.

As a loving wife, you should stay by your husband’s side. Be respectful of his current situation. Telling him what to do will only infuriate him more. He may also focus his anger on you instead. Respect does not mean tolerance, but taking the high road in an event. You can still respect your husband without condoning his actions.

Sometimes, our own anger gets ahead of us, and we don’t realize that our spouse has a persistent problem that we do not know about. Your husband may constantly be angry because of one concern that he does not have a solution to.

One friend of mine reminded me that all men have an unusual behavior of finding solutions. One time, she was talking to him about the neighbor throwing garbage at their yard. She actually did not want any solution to the problem because she could solve it on her own. She just wanted to share her emotions with her husband.

But the mind of the husband works a little differently. Instead of assuring her that everything was going to be alright, he was presenting her with solutions to get back at the neighbor and their trash!

What you can do here is just talk to your husband about it. If he hasn’t acted like this before in your marriage, there has to be a problem in his mind that is bugging him. Ask him if you can do anything about the problem.

For some husbands who do not talk a lot about their past, this can be a problem. But you have to say to your husband that the only way for you to solve your marriage issues is by talking to each other. You can also ask marriage counsellors or from your local church to help your husband if he had problems in the past that are causing him to always be angry and negative.

Validate His Change of Actions.

Once he starts to recognize that he is always in a furious state and does not respond positively in any given situation, he should want to change and behave to become more suitable and helpful in your relationship.

He will start removing some things in his life that are causing him to behave this way. He will also become more aware of what he does and says about certain things. If he starts doing things like these, you should be alert and acknowledge these kinds of situations.

Commend him for becoming what he is today. Assure him that he is doing great. A reward can also be useful. You can present him with his favorite dinner every time he soothes his own anger. You can give him a massage every time he shows himself having a positive mindset.

It is all about supporting him and reinforcing his works through your own positive behavior.

I think all wives know this! Being with a person of the opposite sex can really test your patience. It is one thing to be with someone for a specific amount of time. But to be with a person your whole life takes a lot of effort and understanding.

If your husband is always angry and negative, you should be patient about it. In time, as you communicate with him and let him figure things out on his own, you should be patient enough to give him time to change. Don’t lose hope. Instead of being angry with him or yourself for not achieving the changes that you want, you can have a positive demeanor and tell yourself that all will be resolved in due time.

Have Compassion for Your Husband.

There are times when his anger towards you will make you lose your composure. Some of your battles will require you to burst into anger yourself. You still have to be aware of these situations. You have to pick your battles. Some conflicts can only be resolved if you talk about it right then and there. There will be hurt feelings, but having a mindset of repairing the relationship can help the marriage in the long run.

If you have to be angry with your husband, be sure that the situation deserves it. As much as possible, don’t let your emotions get in the way of helping your husband lessen his angry attitude.

link to How Much Pumpkin to Give a Dog? (for Constipation and Benefits)

Some dog owners use pumpkin as a remedy for several gastrointestinal ailments – including constipation and diarrhea- but is pumpkin safe for canines? Most dogs are quite food-driven and will...

Continue Reading
link to Are Acorns Bad For Dogs? (Explained and 11 Quick Facts)

Have you had a sudden situation where your dog swallowed a few acorns from the tree while they were enjoying their time alone outside or walking them? Acorns can be harmful to your dog. Acorns...