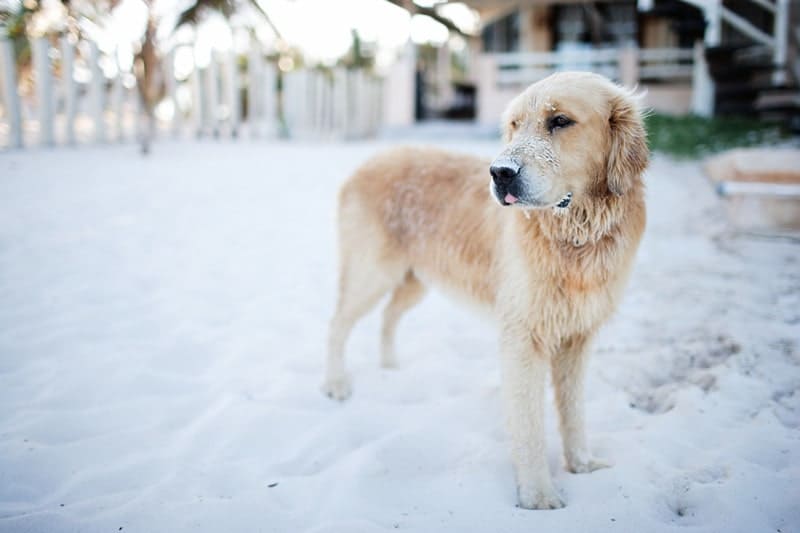 As it turns out, mini golden retrievers have all the lovable qualities of the golden retrievers but on a cuter level, if that’s even possible. Think of a dog with a perky personality, lots of love and devotion but packaged as a cat. That what the minis are all about.

However, these cute and fluffy animals are full of surprises. And rather than being the smaller version of the goofy golden retrievers, the minis are a breed of their own. Even if they were at heart design dogs, they still come with all the complexities and responsibilities of having a pet at home. Read on to find out more about these amazing animals.

What Is A Miniature Golden Retriever?

Many people mistake miniature golden retrievers for a smaller scale of the golden retrievers. But in the world of breeds, this is a gross misunderstanding. The minis are not a single breed, rather a mix of many breeds rolled into one.

The goal is not just to play around with the genetics of the different breeds. Rather, it’s to create a golden retriever as small as a poodle but with all the affable personality that retrievers are famous for. Because of the different breeds involved, not all minis are the same and differences in temperament and character abound as we’ll see later.

Age and longevity are one of the factors where the minis differ greatly not just with the golden retrievers but also with the other breeds.

The minis have an average lifespan between 10 and 15 years. They get this relative longevity from the small-sized breeds they share some of their genes with. On average large dogs tend to age faster and show the signs of time quicker than the nimble and nut-size dogs.

The regular golden retrievers, on the other hand, tend to age faster and their lifespan is between 10 and 12 years at most. It’s their size that hastens their departure. As large dogs with more animated characters, they tend to spend up their reserves of energy at a higher pace. By the time they reach 10 years they already look old and act old.

As smaller breed, the cocker spaniels are expected to live longer than their larger counterparts. However, their small size doesn’t seem to benefit them much here and their average lifespan is around 11.5 years. It’s obvious the minis don’t get their longevity from this breed.

The lifespan of a poodle is around 14 years. This is where your mini gets its relatively long life from. It’s worth noting that only minis that come from breeding golden retrievers and poodles would have a long lifespan compared to other breeds.

How Big Is A Miniature Golden Retriever?

As the name indicates, the minis are small in size and height. The average weight of the mini is between 20 and 45 pounds depending on their diet and pedigree. They also have a height to match and range between 14 and 20 inches in height.

The real thing weighs between 55 and 75 pounds. Males are usually heavier and bulkier than the female of the species. Their height is anything between 20 and 24 inches. Diet and exercise affect their size and weight. 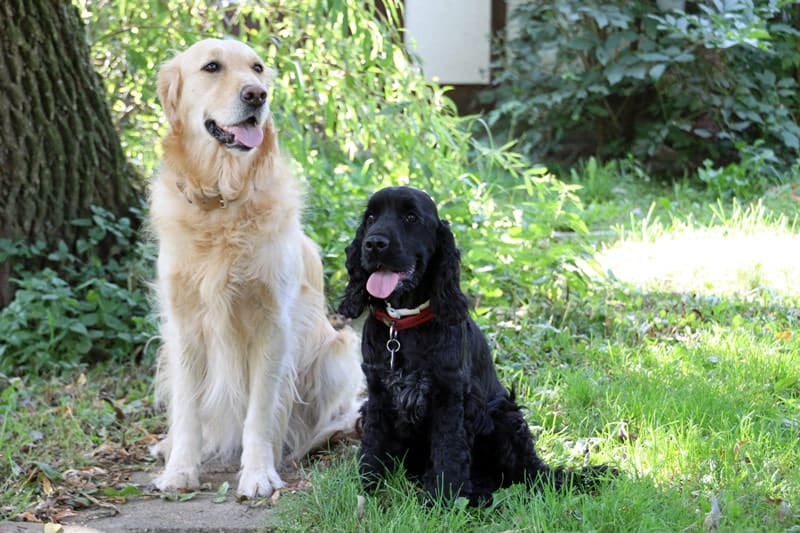 Weighing slightly less than the minis, cocker spaniels average between 25 and 34 pounds. As for height, they are about the same the minis and reach anything between 14 and 17 inches on a good day.

As one of the small size breeds, poodles give the minis their characteristic miniature stature. Reaching 17 pounds on the upside and 15 pounds on the lower end of the scale, they’re as cute as they’re cuddly. Height-wise, they range between 10 and 15 inches no more.

Temperament Of The Miniature Golden Retrievers

Because of the mixed breeds thingie, not two mini will have the same temperament. While golden retrievers are popular in many households because of their docile temperament, your mini has traits from the other parent which could be the poodle or the spaniel cocker. So it’s time to talk about the temperament of all of these players.

Affable, energetic, playful, docile, and friendly. These are some of the characteristics of the golden retrievers. They’re clever dogs and don’t like to sit around idly for long. Always looking for a game to play or a human to cuddle, they’re perfect playmates for children and adults alike.

If the golden retrievers don’t like to be idle, the cocker spaniels are a beehive of activity. They’re always on the move and jump from the table to the sofa only to hide under the bed. You can get dizzy just watching these balls of energy in action. That said, some of them might get quirky tempers from time to time.

Poodles are the wisest of the lot. They’re calmer by nature although they’re still active and get bouts of energy that keep them going for a long while. They’re also fast learners and pick up tricks and perform them in no time.

Their vague origins only complicate their lives as far as health issues are concerned. While the different breeds that get together to produce the minis have different health issues, the best way to ensure your mini is healthy is to check its parents.

One of the biggest health issues that golden retrievers face is cancer. It’s the major cause of death among these friendly animals. Other issues that appear as the animal gets older are eye problems, hips injuries, and elbow issues.

Liver disease and blood clotting are some of the health conditions that these fun-loving animals suffer from. Eye issues are common among cocker spaniels so you need to have their eyes checked regularly to avoid any complications.

Poodles have many health issues for such a small dog. Bleeding disorders, hormonal issues, eye problems, and seizures are some of these health conditions that you need to be aware of. If a mini has a poodle as its parent, it might be susceptible to these health problems as well.

What Is the Miniature Golden Retriever’s Personality?

Like a box of chocolate, minis are full of surprises when it comes to their personality. They can be bubbly, energetic, and loyal like golden retrievers or they might have mood tantrums like the cockers spaniels. Again, it’s best to research the parents of your mini to know how it will turn out to be.

Canadians are famous for being nice and polite. The same can be said about golden retrievers. They like to please everyone around them including the sulking cat. They like to stay active and when trained well they can bring a smile to your face with their antics.

As gentle and happy animals, the cocker spaniels lead a happy full of bliss and enjoy being around children. However, some might be prone to biting and can be moody.

As the cleverest of the whole bunch, poodles know where they stand with other animals and even humans. They’re proud animals and have a stubborn streak. They’re not easy to change their minds and take a lot of training to become manageable.

The answer to this question relies on the parents of the animals than the particular breed itself. It all depends on which genes have the upper hand in the mini’s system. If it got more from the golden retriever than the other breed, then it will have longer hair which tends to shed.

Poodles have short and curly hair and shedding is not one of their most characteristic problems. So it’s not really easy to predict whether your sofa will be covered with hair or not. The only way to tell is to take the mini home and watch it grow in front of your eyes.

Unlike some dog breeds that shed a lot of dander and send you sneezing your way out of the room if not the whole house, minis are much safer to be around. This is why they’re called hypoallergenic.

It’s easy to take care of the mini’s fur. Grooming is simple and won’t require much time or extra attention. That said, you do need to groom them every day. Their long hair tends to knot and become too stubborn to smoothen out.

Knotted hair becomes a problem as it causes the mini a lot of pain to touch or try to untangle. If you can’t work around the knotted hair, you might have to shave it off.

Food And Water (What To Feed, How Often To Feed?)

As super energetic and hyperactive dogs, minis need food high in protein to keep them going for hours. That doesn’t mean that minis are as finicky as cats for example. Whatever you put in their bowl is fine with them and they’ll eat it gratefully.

You should keep in mind that your mini needs to be fed daily. Don’t skip feeding it otherwise it will get sick and have bone problems. It needs about 2.5 cups of food a day. How you split that is up to you and your dog’s needs. Overfeeding can lead to obesity.

Water is a must and your dog should have a bowl full of water at all times at its disposal. The type of food they eat and the overactive life they lead makes them thirsty.

Your mini is a clean dog. Its outer coat is waterproof and doesn’t get dirty easily. The undercoat hardly needs washing and should be kept dry. This means you don’t have to bathe your mini unless it plays in the mud or oozes an offputting smell.

Use lukewarm water to keep the mini comfortable and lather it with dog shampoo. Don’t leave the wet dog in the bathtub and go answer the door. You’ll have a messy house by the time you get back.

Make sure to dry the mini thoroughly when done paying attention to the undercoat. Use thick towels to absorb all the wetness out of the fur. Any excess water will be shed everywhere once the dog gives its hide a good shake.

Sport (Which It Better, How Much Time To Spent?)

Since the mini’s parents, no matter what breed they are, are all energetic animals, the mini needs to have a lot of exercises. It’s a sporty animal by nature and you’ll need to accommodate this trait.

When taking your mini out for a walk be prepared to move quickly and even break into a jog to keep up with your dog. It will drag you along if it needs to just so it can get all that excess energy out of its system.

Be prepared to spend hours every day playing with them. Fetch is the most entertaining game for minis although they wouldn’t mind playing with a ball, a doll, or any toy you give them. Minis are no couch potatoes, so you’d better not be either.

link to Can Rabbits Eat Asparagus? (Benefits and Quick Facts)

It’s no question that vegetables should be part of your rabbit’s diet. But what may not be apparent is the type of vegetables that are best for rabbits. Some vegetables are safe for humans to...

Guinea pigs enjoy snacking on a variety of tasty treats, many of which you can find in your fridge and kitchen. One of those snacks you may be tempted to feed your guinea pig is strawberries. But can...