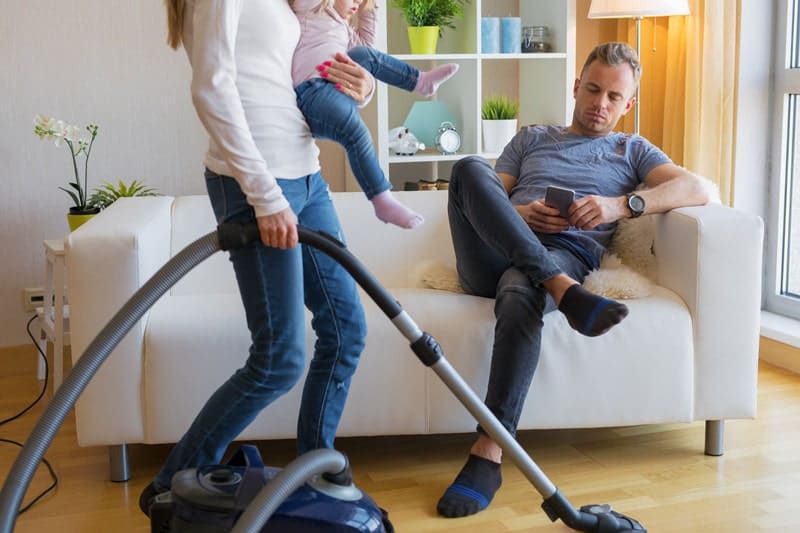 While plenty of women tend to complain that their husbands are lazy, is it truly a character flaw of their gender, or is there another explanation for these guys’ lazy behavior? Whether it’s not picking up chores around the house or just waiting for you to take care of things he never seems to do himself, you’re likely asking yourself a similar question.

While many women seem cursed with lazy husbands, it’s possible to help yours begin to contribute more to your household and your partnership. It may not happen overnight, but with the right approach and a little patience, you can overcome your husband’s laziness without neglecting or increasing your own responsibilities.

Here we’ll look at the reasons why so many husbands are lazy, how you can encourage him to step it up, and what to do to keep things moving once you get the results you want!

The first step in getting a lazy husband to put in his half of the effort is by talking things through. But for many wives, this is a tough first step! After all, haven’t we spent months already nagging and sending subliminal messages about how stressed and unhappy we are?

But the problem is, men aren’t mind readers, even if your husband is your soulmate! Speaking up has to be the first step so that you know you’ve made yourself clear—without nagging or picking at your husband. Here’s how to do that!

Explain How You Feel (And Listen to Him, Too)

Remember when you had conflicts with other kids as a child? Your parents or teachers probably told you that even though you felt like little Tommy was a jerk, that wasn’t the thing to say to resolve the issue. Instead, you were instructed to use “I” statements, instead of putting all the blame on the other party.

And while we shouldn’t treat our spouses like children, there is something to be said for this method! It forces us to address issues from the perspective of how we’re feeling about things, not from the view that we’re reacting to what the other person is doing or has done.

So instead of telling your husband, “You never take out the trash,” you could rephrase it as: “I feel like the responsibility always falls on me to take the trash out.” Rather than placing the blame on him for not taking care of a task, you’re framing it based on how you feel about the scenario.

And, keep in mind that for most people, laziness stems from factors such as low self-esteem, fear, and even hopelessness. It’s possible that your husband is experiencing one or more of these factors, and that’s why talking things out is such an essential part of this process. Speak for yourself, but be sure to listen to him, too!

Even if you feel that your husband is the laziest man on the planet (which many women do!), odds are, there are still at least a few things that he does do around the house. Whether he makes sure to clear the leaves off the lawn each week or handles the mowing every weekend, there isn’t often a husband who doesn’t do anything.

The issue is, he often does things his wife may not notice as much as the overflowing trash can in the kitchen, the pile of dishes in the sink, or the dog hair on the carpet. But before we can address those issues, we should first look for something our husbands are doing that’s positive.

Start by complimenting what he does do, acknowledge his contributions, and help him to feel valued for what he’s bringing to the table. It might feel a bit like helping bolster your child’s spirits when they’ve had a disappointment in life, but every person needs that validation from people in their lives—spouses included.

​Set Up a System

Now that your husband has heard your side of the argument and knows how you feel, that will hopefully be motivation for him to help out more. Especially if you’re at home tending to the house and kids while he’s at work, he might feel like he’s doing his job and you’re doing yours. Airing things out together will hopefully help him see it more clearly—and accurately.

Next, you’ll need to set up some sort of system and agree on how things will change moving forward. And it’s okay to accept a small amount of change at first—the idea is to make small changes into habits rather than going all-in and failing a short time later.

Think of it as a diet versus a lifestyle change: we want long-term changes, not a drastic turnaround this week—and this week only.

The first step in setting up a system is to agree on who will do what and when. Maybe your wants are simple, and you’d like for your husband to put his dirty clothes in the hamper—or even the washing machine—when he’s done wearing them.

Whatever the tasks are that you want him to complete, note them down or at least agree on them verbally. Also acknowledge which tasks are your responsibility—this helps to maintain the balance and harmony that we’re going for. After all, no one should feel unappreciated or as if they have more chores than their spouse—even if that’s the case, as most wives will admit to!

Let Him Do Things His Way

Even though you two are a match made in heaven (hopefully!), that doesn’t mean you’ll both approach a task the same way. So if you usually make dinner and start it at 5 PM but he doesn’t start cooking until 6 PM, give him room to do his thing.

Similarly, if you request that he help out with taking the trash out, but he wants to do it before the game starts on TV when you usually do it after, don’t put up a fuss. If it’s really a point of contention, that might be something to approach later—or maybe you’ll agree to swap chores so that you take over trash and he takes over something else.

Overall, however, give your husband the freedom to do the task the way he wants, not the way you would do it.

Set a timeline for when things will be done, and when you’ll talk about it again. Perhaps you’ll try out the new “schedule” for one week. That could span your husband taking out the trash one day in time for pickup, starting a load of laundry when he runs out of clean underwear and socks, and mowing the lawn and cleaning up afterward on the weekend.

Of course, your to-do list may span many more items or may include things like getting out and going for a walk together—that’s another part of many wives’ complaints about lazy husbands. Whatever result you want, make sure to factor it into your check-in process.

For example, maybe you’ll go for a walk around the block together once per week. And after talking about it the next week, you may add a day—or you might change the time that you head out for your walk.

The key is to check in and make sure the other person is still committed to whatever the plan is, and that you’re working toward progress together. After all, a husband and wife are a team—no matter how much we wives feel like we’re leading the pack most days!

While it’s unkind to say that men are like pets, many wives feel that way! And while it’s understandable, try not to be condescending toward your husband when acknowledging his efforts. Because it’s a true sign of his commitment to your relationship and your marriage that he’s working on this with you—and even that deserves acknowledgment.

Therefore, the third step is to “reward” your husband for what he’s done well and continue to point out his progress and how much you value his help. Especially if your husband mostly considers household chores and projects to fall under his wife’s domain, thanking him for going “above and beyond” is a smart idea.

After all, he may see it as he’s helping you manage the house, instead of doing his fair share. As far as rewards go, it can be whatever you want—and it doesn’t have to be a physical reward, or even a monetary or another one.

The “reward” could be as simple as an acknowledgment from his loving wife that your husband is doing a great job—or at least making progress—when it comes to putting more energy into your life together. And remember, forming new habits takes three things: planning, consistency, and patience. Make sure to leave time for those!

link to Do Cows Like Music? (Accordion, Jazz, Classical and Why)

Cows are especially fond of classical music because it calms them down and relaxes their body. They enjoy upbeat music as well but can actually stress them out if it's too fast. Overall, cows are big...

Absolutely. Chickens can safely eat both raw and cooked plain rice, but should enjoy it sparingly as a treat within a balanced diet. Rice is a cereal grain that provides nutrients and energy to your...