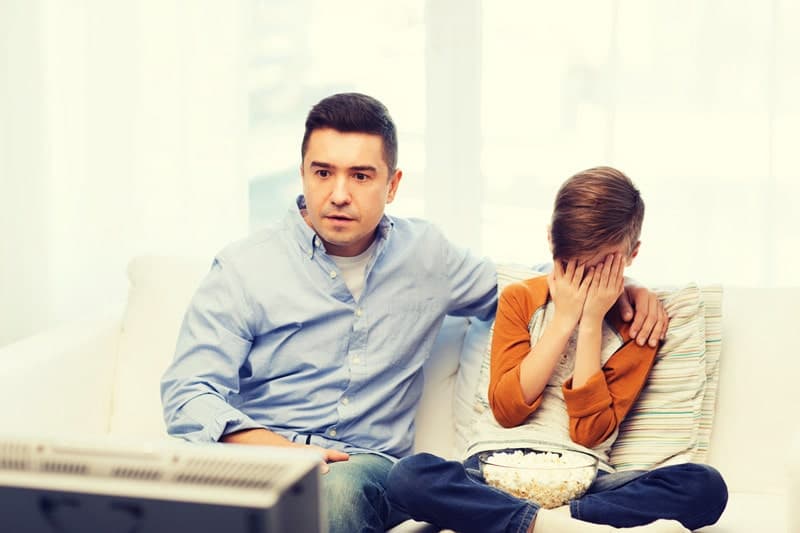 Whether its OK for a 10-year old to like watching thrillers depends on the 10-year-old. It also depends on the content of a particular movie. No two children are alike, and no two thriller movies are exactly alike, although many share common themes, plot lines, and other elements.

Thriller movies may contain elements of violence, strong language, and adult situations. This is not considered suitable for ten-year-olds. The MPAA rating system was created to provide guidelines about what is appropriate content for young viewers. Parents can use the system as a guide when deciding what movies to allow their children to watch.

Most 10-year-old children are developed enough to understand that movies are make believe. This doesn’t mean that thrillers are appropriate viewing for them. Parents need to make that judgement for themselves, but they don’t have to do it alone.

It’s hard to know how certain movies will impact children. Parents can’t be expected to prescreen every movie before allowing their kids to see them. The Motion Picture Association of America (MPAA) provides ratings for movies for this very reason. These are recommendations on a movie’s suitability for younger viewers. There are five ratings in the system:

Most thrillers fall into the PG-13 or R rating. A PG-13 rating means that parental guidance is suggested for children under 13. An emotionally well-developed ten-year-old may be fine with a PG-13 movie, while some kids the same age may find these movies disturbing. The MPAA ratings are the basic guidelines for parents looking for help.

These MPAA’s ratings were introduced in 1968 and changes have been introduced over the years. This rating system is also used for other forms of media such as music, video games, and television shows.

Whether parents should be concerned about their 10-year-olds liking thriller movies depends on the content of a particular movie and what the parent may deem harmful to their child. Most can agree that scenes of senseless violence can have a negative affect a child. It may cause them anxiety and fear and give them nightmares.

Movies classified as thrillers typically feature adult language and situations that a ten-year-old won’t understand. There may be nudity as well. Parents should limit a child’s exposure to these types of movies regardless of what genre they are in.

What Makes a Movie a Thriller?

The term thriller is quite broad. Some thrilling movies may cross over into other genres like comedy, romance, or horror. What generally classifies a movie as a thriller are certain elements like excitement and suspense.

Thrillers typically feature many plot twists. In a typical thriller movie, important information is withheld for much of the film to keep the audience in a state of suspense. This information may be revealed slowly or suddenly in an effort to surprise or shock the audience. These elements are exactly what the audience expects. They expect the unexpected and would be disappointed were it otherwise.

In order to keep audiences of thrillers guessing, the plot lines can get very elaborate. The question is whether children can process these complicated plot lines. If they are unable to, this might not prevent them from enjoying the movie just the same.

Some thrillers contain a lot of action which appeals to kids and may explain why they are drawn to them. Car chases in particular are fascinating to ten-year-olds. Some movies that kids like contain elements of thrillers even though they aren’t necessarily considered part of the genre.

A movie like Jurassic Park, for example, is considered a science fiction action film but few could deny it is quite thrilling. It also has a PG-13 rating but many young kids have watched the film, with and without parental supervision, since its release in 1993.

Assuming that the child is drawn to the same things that attract adults to thrillers, it is not unhealthy for them to like these types of movies. Kids may enjoy trying to figure out the different plots and subplots. It could even be a sign for parents that they have a future filmmaker on their hands.

Some of the common themes found in thriller moves are:

Many thrillers feature complicated plot lines that even some adults may find difficult to follow. Part of the attraction these types of movies have for people is seeing if they can figure out how things are connected, who the bad guys are, and who is going to double cross whom. Some people like the way these movies make them feel. This can certainly start at a young age and shouldn’t be a cause for concern.

What all these classic films have in common is that audiences are kept at the edge of their seats. Tension is raised repeatedly throughout the films giving fans a rush of excitement. This has appeal to children as well as adults, even though it’s hard to imagine ten-year-olds having the patience to watch old Hitchcock movies.

Many of us develop our tastes for movies at an early age. We also tend to outgrow certain types of movies as we enter our preteen years. If parents are concerned that their ten-year-old is watching too many thrillers they should try limiting the amount of content the child views overall.

The thriller genre itself shouldn’t present an issue, but again, it depends on the content of the movie. Using the movie rating system is a good guide for this but parents need to use their best judgement when making these decisions.

How Old Do You Have to be to Watch a Scary Movie in Theaters?

Similar to thrillers, horror movies typically have a viewer advisory rating of R. Some have even earned a rating of NC-17 which replaced the X rating in 1990. The Texas Chainsaw Massacre III movie was given a rating of NC-17 due to its scenes of graphic violence.

Does Watching Horror Movies Affect You?

Studies have shown that people who go to haunted houses are in a better mood afterwards. Fear is a very basic human instinct. For our ancestors thousands of years ago it was something they experienced every day. In modern society, we don’t get our blood pumping in quite the same way. You could see how watching thrillers and horror movies can trigger this fear, which is very natural and something we even seem to crave.

Are Horror Movies OK for Children?

Thrillers may contain elements of horror movies, and vice versa, but generally these are considered two different genres. If a ten-year-old is likes watching horror movies with graphic scenes of torture and violence that could be a cause for concern.

Parents should monitor other behavior in their child if this is the case. A love of horror movies may also include a love of violent video games or comics and graphic novels.

Horror movies contain some of the same elements as thrillers. They are usually more violent and have more blood and gore, but elements of shock and the unexpected are found in both types of films. If a 10-year-old was fascinated buy the guts and gore of these types of movies that would be something a parent would want to limit their exposure to.

If you know any 10-year-olds who like watching any of the movies or sub genres of thrillers listed above there’s probably no reason to worry. Again, this depends on the level of adult content contained in each. The genre by itself isn’t harmful if you take those things out of consideration. It’s best for parents to use the MPAA movie rating system as a guide and to use their best judgement.

Over exposure to movies, TV, and video games is always something to keep an eye on. Moderation is recommended. Parents should view thriller movies with their kids so they can explain things to them and monitor their reactions.

Washable Masks: Save $100 when you shop SchoolMaskPack’s Classpacks and get 5 FREE Adult Masks with every order at schoolmaskpack.com!