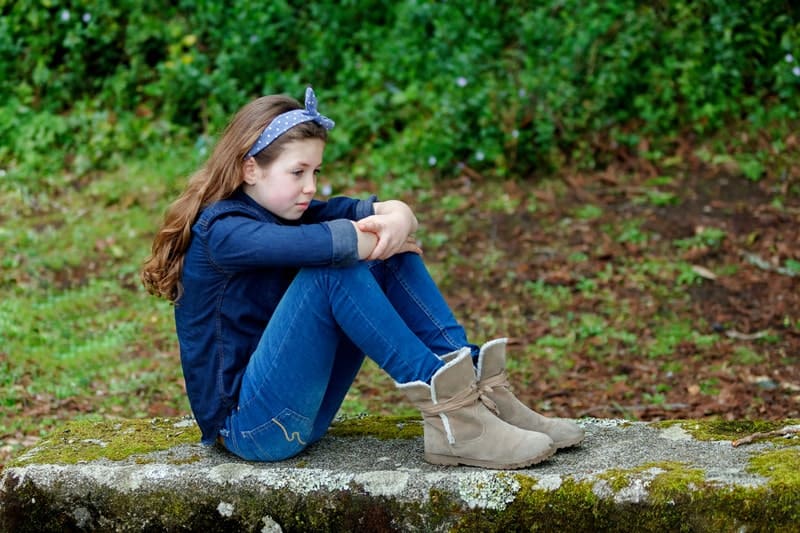 So is it normal for a 10 year old girl to begin menstruating? Yes, it is not considered unusual for a girl to start her menstrual cycle at age 10. Although this may be considered an early age for most girls to start, 10 years old could not be classed as ‘abnormal’ because it does not fall into the age bracket associated with ‘precocious puberty’. Precocious puberty is the condition in which unusually rapid growth leads to girls as young as 7 and 8 years old getting their first period.

When you also consider that the normal age range for puberty occurring in girls lies between the ages of 10 and 14 years old, a menstrual cycle beginning at age 10 would mean that a girl’s period has simply happened at the earliest end of the spectrum. Getting your period this young may not be abnormal, but girls getting their period at this age may not appreciate the early start! Read on to find out why some periods come early and how 10 year old girls can cope with early menstruation.

In fact, 10 years old may one day become the new average age of girls getting their first period as researchers have begun to notice a trend in girls developing at earlier rates. A large scale Pediatric study conducted in August 2010 found that, by as early as age 7, 10 percent of white girls, 23 percent of black girls, 15 percent Hispanic and 2 percent of Asian girls had begun to develop breasts – the first stage of a girl’s puberty.

Puberty consists of three key stages for girls – breast budding, the growth of pubic hair and finally, the beginning of her period and this process normally takes 2 years in total. Experts in the field agree that as long as breast growth is happening at an earlier age, the event of a girl’s first period will start occurring earlier as well.

Pediatric endocrinologist Louise Greenspan reveals that the line between girls with disorders such as precocious puberty and girls developing on the early side of the ‘normal’ curve is beginning to blur “There used to be a discrete gap between normal and abnormal, and there isn’t anymore.”

Why Do Some Periods Start So Early?

Doctors still can’t pin down the precise causes of early menstruation, but they have identified weight as a common factor for early puberty, as it’s thought that girls who are overweight are more likely to begin their menstrual cycle earlier than thinner girls. Researchers believe that this is due to fat tissue setting off a ‘feedback loop’ that causes a girl’s body to mature.

Robert Lustig, a professor of clinical pediatrics at the University of California, explains that girls with a higher fat content tend to “have higher levels of the hormone Leptin, which can lead to early puberty, which leads to high estrogen levels and greater insulin resistance which in turn causes girls to create more fat tissue and Leptin until the cycle repeats itself – continuing until a girl’s body reaches physical maturity.”

If your daughter has begun menstruating at age 10 (or perhaps younger), it can help to take her to a pediatrician for reassurance that early maturity is nothing to worry about, and that she is developing at a healthy, normal rate according to her weight and height.

Your pediatrician will be able to calculate where your daughter lies on the ‘normal’ scale by looking at her family’s history of health patterns and determine from her growth whether endocrine testing may be necessary.

Endocrine testing essentially tests for hormone irregularities and imbalances that could affect things like growth and reproductive health. If a girl has irregular periods, for example, this can be down to hormone imbalance and may affect her future fertility chances. Luckily an endocrinologist can assess possible complications at the early age of 10 years old to help your daughter regulate her menstrual cycle and feel as comfortable as possible during her period.

When Should My 10 Year Old Girl See a Doctor?

Your daughter will eventually get the hang of managing her symptoms and unique bleeding patterns as she gets older, but she should see a doctor immediately if she experiences any of the following during her first period:

The Psychological Effects of an Early Period

Although getting your period at 10 years old is normal in physical and biological terms, the experience may not feel normal for the girl in question. Early development can have a strong psychological impact on girls, as they suddenly find themselves maturing faster than their peers.

This is why it’s important that every care is taken to ensure your daughter, best friend or younger sibling doesn’t feel abnormal about her body’s natural process.

Discovering that you have begun menstruating for the first time can be a challenging and awkward transition for any girl, but experiencing the start of your menstrual cycle at age 10 can be especially isolating – particularly if you are the first girl in your friendship group or class to get their period.

As pediatrician Dr. Sara Kreckman makes clear, it is vitally important that parents of young girls experiencing early puberty talk to them about these changes to eliminate the stigma of being ‘the first’.

The best way you can eliminate a 10 year old girl’s fears or embarrassment about getting her period early is to talk openly and honestly with her about what is happening in her body. Help her bridge the uncomfortable gap between still being a girl and a kid and why her body is helping her prepare for becoming a woman. Pediatricians recommend the following to parents and guardians of young girls starting their first period…

Be Honest and Direct

Parents might feel uncomfortable about telling young kids the whole truth about their growing bodies, but when it comes to dealing with periods at 10 years old, you owe it to your daughter to help her understand her bodily changes. Pediatrician Dr. Kristin Millin advises that “children respond very well to the truth and are more resilient than we give them credit for”, so don’t be afraid to talk in detail about why her uterus lining sheds, how long it normally lasts and the possibility of pregnancy.

Using your own experience as the mom or older sister of a 10 year old can be a great ice breaker into the conversation and give you a chance to correct any misinformation she may have heard about periods from. This may open her up to ask things like “Did it hurt?” and “What if it happens at school?” – let her know that she can always come to you for answers and give her the tools she needs to always feel confident and prepared.

Read a Book on Puberty Together

If your 10 year old struggles to put into words how her bodily changes are making her feel or has more questions she wishes she could ask someone, reading a book on puberty together as mother and daughter (or daughter and big sis!) can be a great way to make her feel at ease. Reading the facts on menstruation from using a tampon and everything in between can be very reassuring for her and help her feel more in control of her own body once she knows what to expect.

Finally, reassure her she’s ‘normal’ – getting her period earlier than other girls may lead your 10 year old to question whether there is “something wrong” with her, but reassure her that deep down, every girl feels the same way.

Psychologist Karen Zager, Ph.D. shares that “emotional swings are a part of adolescence, and we all figure that everybody else is developing normally and we’re not. “Reassure your daughter that others will catch up with her development” advises Zager. And most importantly, congratulate her on her milestone of becoming a woman!