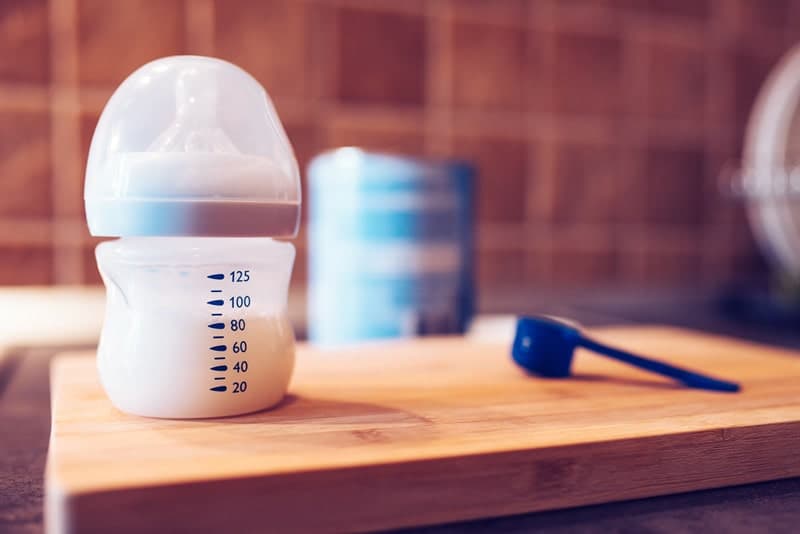 Many women choose to breastfeed their children rather than feed the babies formula for the first several months to a couple of years old. However, most women will only breastfeed for an average of 6 months. Those that go longer, will usually go up to two years of age. It is not considered appropriate to breastfeed a child over the age of three. In short answer, no, it is not acceptable to breastfeed a 10-year-old child.

We’ve all heard the saying “breast is best” when talking about breastfeeding versus formula feeding. But is it really true that breastmilk is better? Pediatricians have been recommending brands of formula since the 1940s, however, that doesn’t make the formula a better choice.

No formula will ever truly match how beneficial breastmilk is. Yes, there are brands that carry types that are close to breastmilk. However, the formula does not carry the antibodies that breastmilk carries.

Breastmilk contains every bit of nutrition a baby needs for the first six months of his or her life. It’s all properly balanced too as a mother’s body produces as much as the baby needs.

The first few days after birth, the mother produces a thick yellow liquid called colostrum. This is very high in proteins and fats and lower in sugars. This “liquid gold” as many call it, helps to develop the baby’s new digestive track.

After a few days, more normal breast milk is produced and in larger amounts. If you feel you are not making enough, just remember your body will keep up with what your new child needs.

Breastmilk also contains antibodies that help your newborn fight against viruses and bacteria. This is something that formula is not able to provide to your baby. Studies have shown that formula fed babies were more likely to suffer from diarrhea, pneumonia, and other infections.

Because of these antibodies, breastfeeding may help to reduce the risk of other diseases. This includes but is not limited to:

Breastfeeding for at least six months has also been known to reduce the risk of behavioral problems as well as problems with learning.

When breastfeeding, you need to monitor what you eat and how your baby reacts to the milk. Nutrients from everything you eat can and will change your breastmilk just a little. With formula, you don’t need to monitor your food.

Another pro to formula feeding is anyone can feed the baby at any time. Breastfeeding leave that job up to you unless you choose to pump and bottle feed the breastmilk to your baby.

Breastfed babies need to eat more often because of how quickly it is digested. This could make for some long nights. The formula will keep your baby fuller longer.

Formula can’t match how complex breastmilk is. Breastmilk will change depending on what your baby needs. There are also no antibodies in the formula. However, some babies can’t handle the lactose in breast milk.

This is where dairy free formula options can help out. Soy is an excellent choice for babies who’s bellies are too sensitive for dairy products. Ask your child’s pediatrician for recommendations on the best formula to feed your baby.

Another loss when it comes to formula feeding is the bond a mother gains from breastfeeding her baby. This is a bond that only a mother can experience with her newborn son or daughter, and this opportunity is lost with formula feeding.

Some mothers, however, choose to formula feed their children over breastfeed them. Whatever the reason behind it–if she is sick or just doesn’t want to breastfeed–it is important not to judge her for her choice.

While breast might be best for most mothers and babies, that isn’t always the case. What matters most is that the baby is getting fed and taken care of. FED is best!

How Long to Breastfeed Versus Formula Feed?

You can breastfeed longer than you can formula feed. The formula is only needed for the first 12 months, or the first year, of the child’s life. After that, you can switch over to whole milk or a milk alternative if needed.

Breastfeeding, however, is recommended to go up to two years of age, or 24 months. This is a feat not often reached with only two percent of breastfeeding mothers say they made it that long.

If you can, it’s best to breastfeed to at least 6 months. At this point, you can start giving your baby other foods such as rice cereal or oatmeal as well as fruits and veggies. If you do choose to stop breastfeeding, make sure you supplement with formula for the remaining months of that first year.

However, after two years of age, breastfeeding becomes null. It does not do much as far as the health of your child as he or she gets most of their nutrients from the other foods they eat. Some mothers may choose to breastfeed beyond the two-year mark.

Breastfeeding until your child is 10, however, is not acceptable to most of society. Even in third world countries where food is scarce mothers don’t breastfeed that long. If you wish to breastfeed your child beyond two years of age, four should be the maximum age.

Any time beyond four years of age is considered inappropriate by the vast majority of society and for good reason. Your child is getting all his or her nutrients from food, so there is no real reason to continue to breastfeed beyond that.

Whatever your choices are, though, remember they will be different from every other mom. The important thing is to not judge another mother because she is choosing to do things differently from you. Parenting is not an easy task so it is crucial that we as mothers, and fathers, support one another regardless of opinions on how a child should be raised.

So, whether you choose to breastfeed your baby for a week or two years or not at all, the important thing is that your child is getting fed.

For years, breastfeeding was the only way to feed your new baby for the first several months of the child’s life. Sometimes, though, breastfeeding was either too hard or impossible if the mother died. Sometimes a mother could not produce enough milk to sustain her child. Back then, when proper nutrition was hard to come by, this was often the case.

Today, we can just go to the store to get bottles and infant formula to feed our infants. You would think that way back before the 20th century that bottles and alternative ways of feeding a newborn were impossible. Think again! Bottles or other similar containers have been found dating back to 2000BC.

Since ancient times, vessels used to deliver milk of sorts to a baby have been discovered. Discoveries of using a hollowed out cow’s horn with a perforation at the end as a bottle to feed the animal’s milk to the child. Other ‘bottles’ were found made of wood or clay.

However, the cleanliness of the bottles was an issue. It was difficult to really clean these types of vessels. Often, infants would get sick because of bacteria build up from improper sanitation of the bottle like containers.

Up to a third of infant deaths who were not breastfed was due to the lack of cleanliness of the bottles as well as improper milk storage. After all, refrigeration was not available back in these times. Milk would spoil quickly. Also, the lack of knowledge to process the milk to kill bacteria was a factor as well.

Up until the 19th century, the most common form of ‘artifcial’ feeding using these vessels was animals’ milk. This alternative method of feeding a baby was usually cow’s milk. This is still used today, but not until a child is 12 months or older.

While cow’s milk was the most common milk used as an alternative to breastmilk, it was all determined to what was available. Goats, sheep, donkey and even pigs or camels’ milk would be used if needed.

However, now mothers have the option to give her children infant formula thanks to a chemist named Justus von Liebig. In 1865, this man developed, patented, and marketed the first infant formula. His formula started as a liquid and then was later made into a powder form to help preserve it better.

In 1835, William Newton patented evaporated milk. This was a result of Nicholas Appert’s 1810 discovery of a technique that could sterilize products in sealed containers. This greatly helped food preservation.

By 1883, there were 27 brands of infant formula available in the market. These all came in powdered form and were to be added to the milk rather than water. It took time for important nutrients to be added to the formulas, so while they were fattening, infants were not getting the proper nutrition he or she needed.

In the 1940s, pediatricians stated that formula was a safe and effective alternative to breastfeeding. From then until the 1970s, there was a steady decrease in the number of women who breastfed her children. Now, the rate goes up and down based on the price of formula and the age of the mothers choosing to nurse or not to nurse.

Nowadays mothers normally fall under two categories: breastmilk or formula.  Some women believe that breast is best and others feel the formula is a perfectly fine supplement.

Washable Masks: Save $100 when you shop SchoolMaskPack’s Classpacks and get 5 FREE Adult Masks with every order at schoolmaskpack.com!