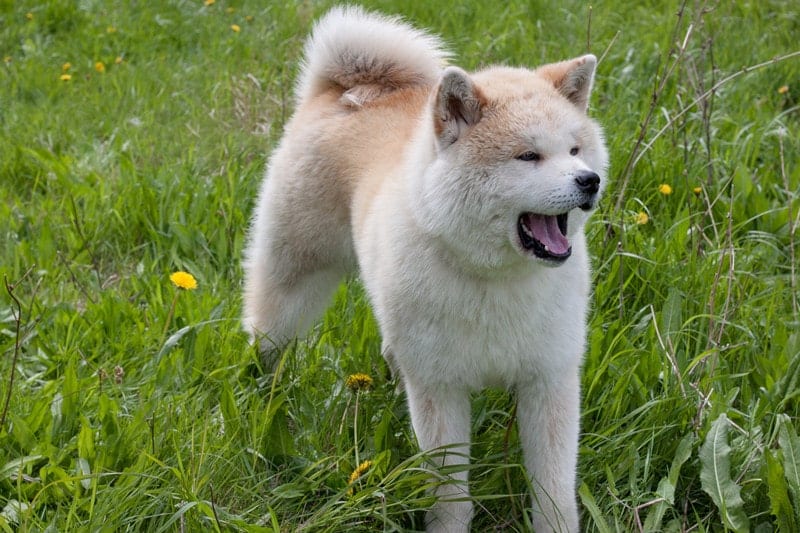 The Akita dog breed originates from the Northern area of Japan; Extremely protective and make as great guard and protection dogs, originally used as protectors for royalty. When it comes to Akitas and their barking, they’re not like the common household dog.

Misconception occurs around Akita dogs and their inability or lack of to bark, which is only half true. These dogs DO bark, but only WHEN they feel appropriate or there’s a good enough reason to, such as when they sense threat or danger coming to themselves or their owners.

Due to their immaculate sense of loyalty towards their owners and their family, be mindful when you hear your Akita barking. Remember, their moans, mumbles, grunts or “talking” is a completely different sound to their barks and you may want to identify what is contributing to their barking if it occurs or re-occurs frequently.

These “Silent Hunter” dogs are incredibly loyal and quiet by nature, however, that does not mean they are timid.

In fact, they’re actually aggressive dogs that work silently in hunting prey (similar to cats), meaning they do not usually bark.

Because of the fact that these dogs don’t bark at anything and everything, you should pay close attention to what they’re trying to communicate with you about if they do bark within your presence.

Why Akita Doesn’t Bark Much?

The only time you may hear your Akita barking will be for a good reason.

An Akita is also extremely loyal, thus barking will only occur if your dog feels a threat is making its way to you or towards themselves.

For this reason (as well as their aggression and other traits), the Akita makes as great guard dogs and can be trained to control their barking if required.

When Do Akitas Bark? When is it OK and When Should it Stop?

As mentioned above, Akitas only bark when absolutely necessary. It is rare for any Akita to bark out of boredom, excitement or other emotional reason. Here are some instances that are considered normal or OK for your Akita to bark and when it should stop.

When It Should Stop

If you notice your Akita becoming increasingly agitated as well as continuing to bark, do your best to calm them down and remove them from the situation as it is extremely likely your dog will turn aggressive and defensive!

Boredom That Leads to Barking

An Akita can begin to bark when they’re bored, however, it will most likely sound closer to a moan or grunt noise rather than an actual bark.

These bursts of noises are an indication that you need to take your Akita for a walk or play as they’re bored and need some sort of stimulation before it turns into aggression and defensiveness.

Akitas have a natural distrust and dislike in strangers—meaning they can become easily tempered and instinctively bark profusely at the sight of strangers.

To control this behavior and prevent future hassles with your Akita, consider training your dog from an early age which should provide techniques to allow them to recognize when the appropriate time to bark is.

An Akita rarely barks, despite if they’re feeling playful and cheerful. Considering you’ve built a fantastic relationship with your Akita, this does not mean they’ll “let loose” and give you a few playful barks here and there.

Instead, they’ll show their excitement in other ways such as their mood, facial expressions, and actions! They may also let out a few grunting noises to let you know they’re happy.

The Important Barks: How to Recognize Them and What to Do About Them?

While some may say their lack of barking is a nuisance, and others may say it’s a blessing in disguise, either way, it’s important you learn how to recognize their barks and what to do about them.

Depending on the tone of your dog’s bark, as well as their position, stance, and environment can help you identify quicker what they may be thinking of trying to tell you.

How To Recognize Them?

If your Akita is barking:

…Your dog is trying to tell you they feel threatened and they’re barking out of a defensive mechanism to protect you or their family.

What To Do About Them?

Once you’ve identified your Akitas barking, you should:

Remember, Akita dogs only bark if absolutely necessary, meaning they won’t bark due to boredom or excitement. If your Akita does bark constantly and for a longer period of time than recommended, consider there may be an underlying problem occurring within them and take them to a VET.

Training an Akita Not to Bark | Reduce Barking

Due to their quietness by nature, you shouldn’t have any problems when training your Akita not to bark. However, beware, owning an Akita is not for the faint of heart and if you’re a first-time pet owner looking to buy and train your Akita, you may want to think twice.

How to Train an Akita Not to Bark?

Firstly, you should know that an Akita is not one to bark at anything and everything. However, there are some techniques you can use to control their barking. The earlier you train your Akita (or any dog you own), the easier it’ll be for you to shape and train them.

1. Implement the Use of Commands

Start by teaching and familiarizing your Akita with words such as “Quiet” or “Speak”.

Entice the implementation of these commands by using treats, before you dog speaks (or remains quiet) and afterward.

Continue to use the commands multiple times a day, and always reward your dog with plenty of love and treats to show them what they’re doing is considered good!

If you’re someone who gets frustrated easily or become impatient frequently, either ask someone else to train your Akita or work hard on refraining from using an aggressive tone of voice.

Yelling, screaming or similar techniques will do NOTHING good but make your dog become angry, upset and frightened. Your Akita may also think you’re encouraging their barking behavior.

Avoid aggression at all times; Instead make a conscious effort to remain calm, speak firmly to your dog but also remaining gentle.

When training your Akita not to bark, keep their learning environment fun, positive and playful! Your dog will learn better in an environment with lots of play, versus a cold, darkroom.

You’re also looking to break your dog’s attention away from whatever they’re barking at (cars, pedestrians, etc). Do this by implementing a positive environment and incorporating lots of treats to gain their focus.

4. Identify When Your Dog is About to Bark and Stop Them

As pet owners, we usually know when our dog is about to bark. Every dog is different, with some having their ears perk up and turn from side to side, whereas others their face perks up.

If you can identify the moment, right BEFORE your dog is about to bark, implement step 1 by using the words “QUIET” while also putting your finger on their nose. Hold a treat in the other hand to let your dog know that if they remain quiet, they’ll get a treat.

Once your Akita has familiarized themselves with the “Quiet” and “Speak” commands being taught in your home, take them to a dog park or an area where there are multiple things happening at once.

The aim is to desensitize your dog when around other dogs, so you can be assured your Akita is well-behaved in all settings.

This is because you want to measure their behavior, not only at home but when you’re with them in public, like taking them for a walk or playing with them outside.

Train your dog at a dog park, ensuring to grab their attention and rewarding them if they’re able to remain quiet, even for a split second (as they’re continuing to observe their surroundings).

Don’t worry if things don’t work for you straight away, it’ll usually take consistent lessons, learning and a lot of barking before your dog will be successfully trained.

Try not to give up and make it a daily duty to implement these steps, over and over until your dog becomes a pro at listening to you when they can and can not bark.

Do Akitas Make Other Noises?

Apart from the occasional barking that may appear coming from your Akita, these breed of dogs are also known to make other noises (at random times) such as long-sadful sounding moans, grunting and sometimes whistling.

link to Do Chickens Need a Rooster to Lay Eggs? (10 Quick Facts)

Hens do not need a rooster to lay eggs. Hens are capable of laying unfertilized eggs without any help from a rooster, but no baby chicks will be developed or hatched. How is this possible without...

Continue Reading
link to Do All Goats Have Horns? (Male and Female) with Pictures

There more than two hundred breeds of goats in the world, ranging in size from the enormous Anglo-Nubian to the diminutive Nigerian dwarf. Some of the distinguishing factors between male and female...