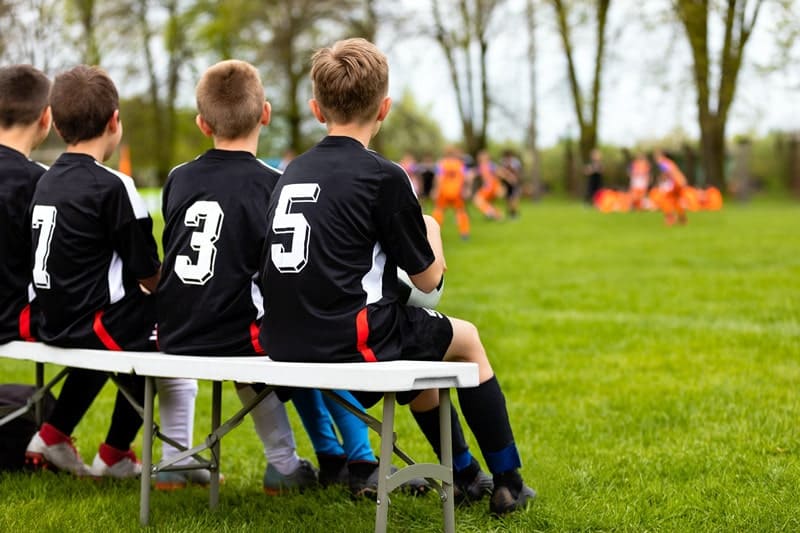 Your 10-year-old son has been playing team sports for some time now. In the past, it’s been one of his favorite activities. You’ve noticed a change recently, though. He now seems to grow agitated or anxious when it comes time to get ready for practice or a game. You ask what’s wrong and he tells you the coach has been treating him unfairly. What should you do for your son?

Your first step in dealing with an unfair coach is to have a conversation with your son. Find out exactly what’s been going on and how it’s affecting him. Once you know, call ahead to schedule a one-on-one sit down with the coach. Present your concerns in a respectful but direct manner while maintaining a positive attitude. Try to come to an understanding from there.

In this article, we’ll go over how to help your son deal with his coach. We’ll cover a few common complaints parents will have as well as tips to make the conversation you have with the coach a positive and productive one. If your son is having trouble with an unfair coach, this article should be a big help to you.

How Do I Help My 10-Year-Old-Son Deal with His Unfair Coach?

At 10 years old, your son is beginning to grow up, but could use the help of an adult speaking on his behalf in some instances. In the case of an unfair coach, this would be one of those instances.

Before you get too heated up, have a conversation with your son to find out exactly what he’s been feeling. Ask him if he’s still enjoying the sports he plays. Let him explain what’s in his head and how his coach’s treatment of him has been affecting him.

The idea that a child’s coach is playing favorites is a very common complaint among parents. Playing time, a change in positions, or seemingly unfair rules can quickly become major sore points. It’s very easy for parents to lay the blame at the feet of the coach since they’re calling the shots. This can quickly lead to heated exchanges between parents and coaches which only serve to make the situation worse.

The most important thing to remember is this is about your son’s feelings and not yours. You may feel a number of different emotions, from anger to confusion and frustration. It can be hard to watch your son get benched at a point you think is too early or see him get reprimanded for an error you believe was caused by another player. A bad call made by a referee can be enough to make you see red. Keep your composure. Blowing up will not do anything to help the problem.

When the time comes to speak with the coach about your son’s situation, there are a few steps you can take to make the conversation more productive. These include:

Understanding how to have a respectful conversation with your son’s coach is key to helping his situation. Sometimes what you or your son may find unfair can be seen very differently by the coach. Talking things over can help everyone come to an understanding.

Five Tips for Talking to Your Son’s Coach

It’s normal to be protective of your son when he’s playing a team sport. There will be points where you disagree with practices, decisions, or rules enforced by the team’s coach. You are your child’s parent and role model, after all. It’s important to remember this and act like it. If there are issues presenting themselves, you need to be able to handle them respectfully and responsibly.

Mature and respectful dialogue with your son’s coach will set a good example not only for your son, but for the parents of the other players as well. It’s also the most effective way to come to a resolution on the different issues that can crop up in organized sports. Let’s take a look at five tips to keep in mind when talking to your son’s coach.

Set an Appointment in Advance

Make a phone call to your son’s coach and find out when the best time is to have a private conversation with them. A coach’s responsibilities aren’t limited only to game time, and they have other obligations to attend to away from the field. Be sure you book your appointment before driving over to their office and finding they’re not available.

When you call to request a one-on-one with the coach, inform them in advance of the issues you’re concerned about. Point these out directly, but avoid being aggressive about it. Understanding why you’re asking for the meeting will allow the coach to prepare whatever they need. They also won’t feel blindsided when you come in. That can lead to a more productive meeting.

Request to meet at a time that’s mutually convenient for you and the coach. Last-minute meetings can induce a great deal of stress and can heighten the emotions involved. Don’t confront the coach in a public setting, either. You don’t want to have too many pairs of eyes on what’s going on, especially if the discussion turns intense. These problems can be avoided easily by meeting in private and being up front and open about the situation.

Be Positive While Being Direct

When you go to meet with your son’s coach, again, make sure it’s in a quiet place such as the coach’s office. This will allow the listener to be much more receptive to what the speaker has to say. If the coach prefers to meet in a public place such as a local café, that can work out as long as you both conduct yourselves in a responsible and respectful manner.

Be direct when you voice your concerns over your son’s situation. Aside from him, you’re the one person who understands his frustration the best. Speak up for his sake but maintain a positive attitude when doing so. Explain to the coach you want your son to get the most out of what he’s doing, and you’d like to do whatever you can to help the situation.

Try to avoid making your primary communication with the coach through phone or email. Discussing the situation in anything other than an in-person manner can lead to a lot of misunderstanding. Have a conversation with your son beforehand as well. Ask him questions about what he’s feeling and what he’d like to see change. Then bring that information to the appointment.

We’ve touched on the concept of active listening in previous articles. This is the process in which the listener completely focuses, understands, and responds to the things being said. Active listening can be divided into three main components:

Coaches can at times feel overwhelmed by the concerns being brought to them by the parents of their team. The best thing you can do is be brief and concise when addressing the issues you’re seeing. Once you’ve finished, let yourself sit back and listen to what the coach has to say in response. Don’t interrupt or protest what they’re telling you. Stay quiet and listen.

Once the coach has finished, repeat a summarized version of their explanation to make sure you have things clear. The situation may be intense, and you need to allow yourself to be open to it. Maintain a calm approach to things and make sure the coach feels respected. Bring forth a concerted effort to listen to what they have to say and the coach should do the same for you.

Make Your Message Assertive, Not Aggressive

Conveying your thoughts in the right way can help the coach understand where you’re coming from as a parent. You’re going to be on opposite sides initially, but more than likely both parties want to come to a resolution. Most coaches are reasonable people who want to be fair to all the kids on their team. Do keep in mind they have a great deal of responsibility to juggle. Hearing from you may make the coach realize they’ve been falling short in a way they couldn’t see themselves.

When explaining your concerns, be assertive but not aggressive. Don’t let the intensity of your emotions dictate your response to what’s happening. It can become really hard to come to any sort of understanding if you can’t see beyond your own anger and frustration. Instead, send a message which places focus on the problem and not the person.

Doing so will help you break through the defensive barriers the coach may instinctively set up in their mind. Paint a picture of what the situation is in a non-judgmental way. Talk about how it affects your son’s feelings and the things you’ve discussed with him at home. Finish by making some suggestions as to how things can be improved upon for everyone’s benefit.

Weigh the Pros and Cons of Going to the Next Level

There are times in which you should take your concerns to a higher level than your son’s coach. If your complaints have to do with playing time, teammates, or referee calls, talking to the coach is the best route to take. That said, if you have concerns about the physical or mental treatment of your son, you may want to consider going to someone in a higher position. These could be signs of a bully coach.

Problems may persist even after you have your meeting with the coach. While some things can’t be resolved overnight, at least some progress should be made fairly quickly. If not, it could be a sign the coach is either unable or unwilling to do anything about the problem. Consider then meeting with your son’s school principal or athletic program director.

Everyone’s individual situation is different. The safest route to take is to go into the meeting prepared for the worst. Even if you follow the tips we’ve outlined to the smallest detail, it won’t guarantee you will be successful. You will however improve your chances of having a positive and productive conversation.

Try your best to remain objective when dealing with issues with the coach. Remember to keep your focus on the problem and not the person. Making things personal will make resolving any issues an impossible task. Both you and the coach will have to be willing to give a little bit. Both of you will have to let each other speak and explain what your beliefs are.

Playing team sports is something your son should greatly enjoy. Having to deal with an unfair coach can quickly take that fun away and replace it with dread. Your son may grow to dislike playing or even want to stop. Talk to him to see how he’s feeling emotionally and physically.

Remember to make an appointment in advance when wanting to speak with the coach. Be direct with your concerns while staying positive and respectful. If you sense the coach is unwilling to back down, don’t be afraid to go to someone in more of a position of authority.

Dog owners only want the best nutrition for their pets, but the amount of choice when it comes to dog food can make it difficult to know which ingredients are best. The recent trend of grain-free dog...

Continue Reading
link to What Fruits Can Dogs Eat? (Benefits and How Much to Feed)