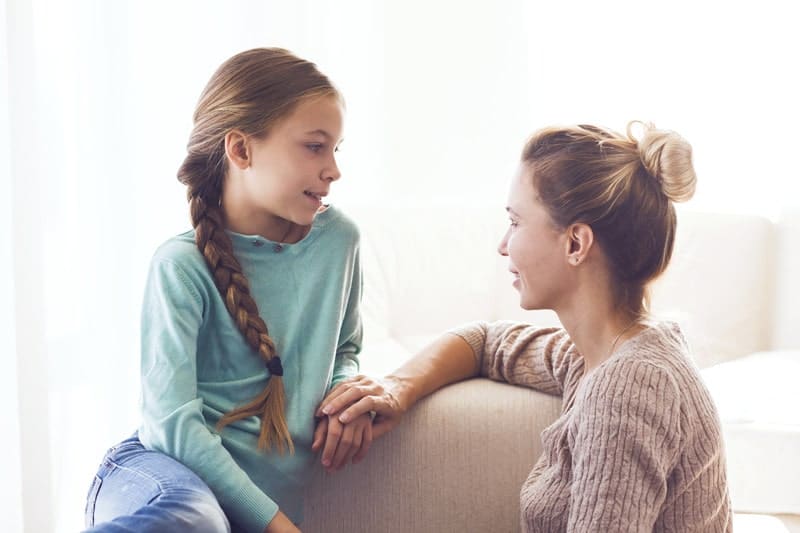 Respect can be defined as having a high regard, esteem or admiration for another’s view, traits, or feelings. Pre-teens (and teens) often find it challenging to show respect to their parents, caregivers, or others in general. These tend to be years in a child’s life when hormones are changing (and raging), and “respect” triggers are in a near-constant state of flux. But there are proven ways to help cultivate an environment and attitude that encourages respect from your pre-teen.

How do you gain more respect from pre-teens? The most effective way to gain respect is by modeling respect so that it’s a mutual dynamic. Beyond that, pre-teens respond with heightened levels of respect when given opportunities for engagement and collaboration, rather than demanding respect from them unilaterally.

Rather than accepting any generalization that all pre-teens and teens are disrespectful and that it’s “just a phase,” learning more about successful strategies for nurturing and modeling respect is a more helpful approach. I have delved into the research to understand more about what triggers an attitude of disrespect, as well as learning tips that can encourage more respect from the pre-teens in your life. Exploration of those findings has been eye-opening and insightful for learning new habits and establishing patterns that lead to success in gaining respect from pre-teens.

It can be easy as parents and caregivers to assume a child is being disrespectful. Often times, though, it can be a misunderstanding on one or both sides. Here is a list of common disrespectful behaviors you may be seeing from your pre-teen:

By realizing that some of these behaviors may be intentionally disrespectful, it can be helpful to also keep in mind that it’s not always the case. Reading the sections below may offer some insights for deeper understanding about the topic of respect through pre-teen years.

What’s Going On in the Mind of a Pre-teen Regarding Respect (Scientifically Speaking)?

As children reach their pre-teen years, they are moving beyond needing constant supervision and in need of more autonomy and self-reliance. Parents and caregivers tend to most commonly exhibit one of four approaches regarding respect: (1) A top-down approach (“because I said so”); (2) Too lenient and too much freedom (and not enough guidance or consistency); (3) micro-management (doing things for their child rather than respecting their capabilities); or (4) coaxing, persuasion, informing and expecting a child to reason their way through and arriving at “respectful behavior.”

None of these approaches have been proven to be as effective as showing your child respect first, and leveraging that respect toward engagement and collaboration. A mutual respect model and approach will glean the best results.

Respect for your child’s autonomy is the key ingredient. When you encourage and nurture a pre-teen’s autonomy, s/he feels more respected. These go hand in hand. If your child feels that s/he is given the freedom of action based on their own choices, and is given responsibility, they feel that their choices and actions are meaningful and matter in the world. This leads to engagement (while disrespect is often expressed by your child as non-engagement and non-cooperative).

Hormones also play a key role, as these are changing during pre-teen years. One of these hormones is testosterone, which is increasing in both males and females during pre-teen development. While testosterone is conventionally linked with aggressive behavior, research shows that it is actually more correlated with respect-seeking.

How rises in testosterone plays out depends on the context. In destructive environments or within peer groups that are more turbulent, it may be expressed as aggression (with the underlying motivator still being a desire to be respected). But in more healthy and constructive environments and supportive peer groups, behavior caused by any rise in testosterone would be expressed differently – such as striving for a leadership role rather than acting aggressively.

So if autonomy is the key ingredient to gaining a pre-teen’s respect, it’s important to understand that when this autonomy feels threatened, your child may “shut down” and disengage. Pre-teens are hyper-sensitive to how parents and caregivers (and adults in general) react to their growing autonomy. When pre-teens feel triggered by “autonomy-threat,” they don’t always know how to process their feelings surrounding the adult’s reaction. They simply shut down because they feel less trustworthy, less able, and more child-like than autonomous.

It’s also interesting to understand that, according to research, pre-teens and teens don’t rebel simply for the sake of rebelling. Research shows when pre-teens/teens feel that requests and rules are fair and just, they are more engaged and cooperative. They rebel when they feel that rules/requests are arbitrary or unjust – especially relating to personal choices, such as clothing or hairstyle choices.

Secure attachment is also a primary ingredient for gaining respect from pre-teens. In this sense, a secure attachment with parents is one where a pre-teen’s environment provides a secure base from which to explore the world around them, make decisions, master their environment, and feel safe while doing so. Pre-teens operating within a secure attachment environment tend to make healthier choices, exhibit fewer risky behaviors, have better social skills, and better coping skills when they reach teenage years.

While growing pre-teens are less physically close to their parents and spend more time with peers, the psychological closeness and assurances are needed for them to feel safe.  Pre-teens will thrive better when they are allowed to express their thoughts and opinions (though still respectfully, allowing for another’s point of view empathetically) without fear that those expressions will threaten the relationship with their parents.

Essentially, when pre-teens feel heard and understood, they are happier, more confident, and more self-motivated. This creates an environment for mutual respect to grow and thrive.

There are specific ways you can encourage a respectful attitude from your pre-teen. By creating a supportive environment, one where your pre-teen feels safe expressing thoughts and opinions even when they differ from those of their parents, respect is a by-product.

Your Child is Not Your Friend.

While parent-child relationships develop more into friendships in adulthood, during the pre-teen years it’s important to keep those boundaries clear. If your child is being disrespectful, you need to set limits and communicate your expectations clearly.

Catch Disrespect as Early as Possible.

If you are not managing disrespect issues when your child is a pre-teen, as s/he reaches teenage years, it will be tougher to manage. During pre-teens years, it’s important to set expectations and give consequences when expectations are not met.

Align Expectations with Your Co-parent.

If your child is allowed to be disrespectful by one parent and not the other, it causes confusion for your child. The message and expectations need to be across the board, and both parents need to discuss and agree on those expectations (and consequences).

Simply expecting your child to say “please” and “thank you” should be a minimum. But watch your child when interacting with others, and when you are away from the situation, offer suggestions for respectful manners based on any behavior you witnessed. Also, model that behavior yourself.  (If you’re not using the same language, the effect will be significantly lessened or non-existent.)

Be Respectful When Correcting Your Pre-teen.

Rather than yelling, getting upset, or embarrassing him or her in front of others, speak with your child calmly, privately, and respectfully.

Communicate About Limits at the Right Time and in the Right Environment.

When things are heated or your child is acting disrespectfully (and perhaps emotionally charged) is not the time to address the behavior. Discuss the behavior, clarify limits and expectations, discuss consequences, and offer alternate suggestions for behavior after the fact, when things are calm.

Taking your child’s comments or behavior personally will only incite disrespectful behavior. If you can remember that it’s common for pre-teens to struggle with showing respect, and keep a middle-line approach, you’ll see better results.

But if you approach the behavior by going too far one way of the other (either taking things personally and becoming too rigid as a result, or not intervening at all and blowing it off as “just a phase”), neither of these strategies or environments is a healthy and effective way to encourage respectful behavior from your pre-teen.

Ways to Model Respect for Your Pre-teen

One of the most effective ways to encourage and gain respect from pre-teens is to model respectful behavior yourself. Gaining a pre-teen’s respect begins with treating him or her with respect and focusing on the relationship (cooperation and engagement) rather than on compliance (power and control).

As an example, you could say something along the lines of “When you play your music too loud in the living room, it disrupts my train of thought and I’m trying to have a conversation with your sister. What do you think we can do so that we can compromise on this – so that you can enjoy listening to your music and I can enjoy having a thoughtful conversation at the same time?”

By addressing the situation in this way, you are valuing your child’s thought process, respecting his or her desire to enjoy a particular activity, and allowing his/her input on an outcome that improves the situation. S/he may offer to turn the music down, or offer to wear headphones, rather than going into another room entirely.

If you simply tell your child to turn the music down and/or go in another room, you are making a hierarchical decision and simply expecting compliance rather than seeking cooperation.

Keep in mind that without a cooperative approach, your pre-teen may also feel that you don’t want him or her around. When situations are managed in this way (with repeated requests for your child to simply be removed from your space because you don’t like the behavior), over time, your child tends to interpret your decisions about his or her behavior personally rather than situationally. This “top-down” approach eventually damages the foundation of an engaging and cooperative environment.

Modeling respectful behavior toward your child, coupled with an attitude of striving for engagement and cooperation from your child, is the most successful strategy for gaining respect from your pre-teen. By understanding autonomy-threat triggers that are a natural part of your pre-teen’s development, you can navigate situations from a position of greater awareness and empathy – both of which are helpful in creating a mutually respectful environment.

Spicy and inviting, wasabis are well-known delicacies. Given its tastiness and wealth of health benefits, would it be proper to feed your dog Wasabi? Could Wasabi be toxic for your dog? Wasabi is...

Continue Reading
link to What Kind of Dog is Scooby Doo? (Why is Great Dane and Facts)

Since debuting in 1969 in "Scooby-Doo, Where Are You!", Scooby Doo has become a celebrity dog. Created by the ingenious Iwao Takamoto of Hanna-Barbera Productions, Scooby is famed for his SD collar,...