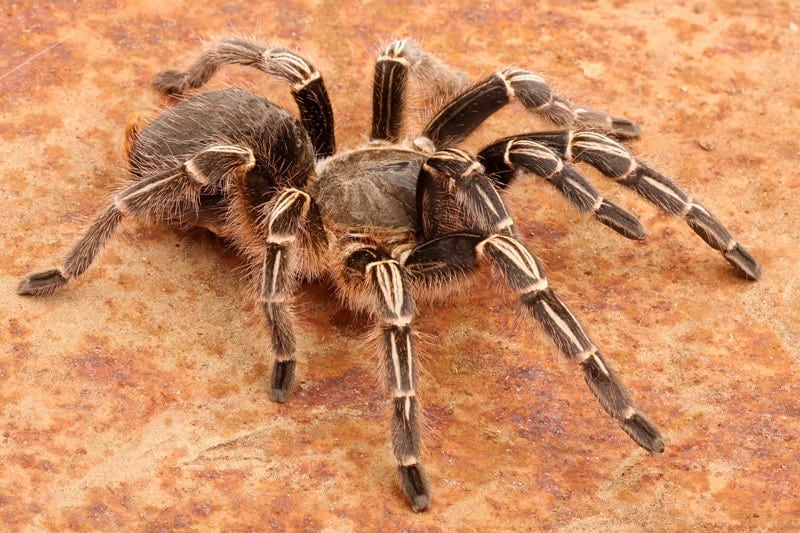 The Chaco golden knee tarantula (formerly known as Grammostola pulchripes) is a spider, home to the Tarantula family. These large and “scary” looking creatures are actually fairly friendly, and have low-impact harm for humans.

Primarily living underground, the Chaco golden knee tarantula is home to the counties of Paraguay and Argentina. They can also be found in desert like places, where there is no room for rain!

The Chaco golden knee is becoming increasingly popular to own as a household pet, especially within the United States. While some would run away from, others are running to! They’re incredibly unique animals that aren’t your everyday pet, which is part of the reason why they’re so rare to own!

Purchasing a Chaco Tarantula as a Pet | First Time Owner

If you are thinking about becoming a Chaco golden knee tarantula owner, you should first do some extensive research! Although they’re easy maintenance, it’s important to speak with other tarantula owners beforehand to broaden your knowledge on the species.

Things to think about/items you’ll need to purchase prior to purchasing a Chaco:

It’s also helpful if you familiarise yourself with the Chaco tarantulas habits, such as their frequency of moulting, temperament or burrowing techniques.

The average cost you should expect to pay for a Chaco golden knee is anywhere between $60 – $85 USD, depending on the age and sex.

Female Chaco tarantulas are usually priced higher due to their timespan, however, younger males may also be priced higher for the purpose of breeding.

If you’re curious to find other breeders, attend shows or enquire more about the costs of owning a Chaco golden knee, try joining your local tarantula lovers Facebook groups where you can speak with other like minded people.

How Big Does a Chaco Golden Knee Get?

Compared to other species, the Chaco golden knee tarantula is one of the fastest growing spider species with their leg growth as big as 8 – 9 inches (20 – 23 cm).

Generally, the Chaco golden knee color varies from black to brown in overall hair and body color, with their knees being a striped yellow – brown, burnt orange toned color.

Although these spiders appear big, hairy and scary looking, you can rest assured that they are not poisonous.

These creatures do have large fangs, however, the bite itself is said to “hurt no more than a bee sting” if used on a human. The fangs of a chaco golden knee tarantula does contain venom though, which is toxic towards their prey.

This is how they’re able to kill their prey, through the venom of their fangs. Thankfully, they don’t work the same with humans! (We got lucky folks)

The only dangerous part of a tarantula and humans would be their considerably fluffy hair, which is said to make us go blind if somehow get lodged into our eyes.

How Long Does it Take a Chaco Golden Knee to Grow?

The Chacho golden knee tarantula can have varied growth rates, depending on factors such as environmental conditions and food supply.

Generally speaking, the average timeframe is believed to be around 4 – 6 years. However, it may take 2 – 3 years to become fully grown from birth or conversely, 5 – 7 years in rare and unique cases. It depends with each tarantula.

As long as you’re providing a warm captivity as well as a regular food schedule, you’ll notice the growth rate in your chaco tarantula averaging or exceeding this timeframe.

The cooler their environment and the less food intake, the slower it’ll take for them to grow!

No, the chaco golden knee tarantula is not arboreal. In fact, they’re terrestrial burrow creatures that can live both underground and above.

Yes, these large tarantulas enjoy digging burrows both in the wild and in captivity. Regardless if you’ve invested in the best quality enclosure for them, it’s a natural instinct for many tarantulas to dig burrows.

Many tarantulas; The Chaco golden knee included, dig deep burrows using their fangs and mighty long legs to push through the soil.

The main reason why spiders, or specifically the tarantula species dig burrows is for their protection and security. Instead of building webs, they use their silk around holes, which aids in the formation for their underground burrow home.

More often than not, you’ll probably notice your Chaco golden knee digging up it’s burrow inside of their enclosure almost as soon as they arrive and settle into your home/environment. This is a natural instinct and will help them feel at ease.

On average, their burrow can be anywhere from 6 – 8 inches (15 – 20 cm) deep and 8 inches (20 cm) wide! It depends on the growth of the spider though, as they do continue enlarging their burrow as they grow.

Remember: These tarantulas are also nocturnal, and it’s rare to see them come out of their burrows during the day!

How Often Does a Chaco Golden Knee Molt?

Molting is a completely normal process for spiders, especially for the Chaco golden knee tarantula. With the amount of hair the creature produces, it’s a good thing that they molt once a year.

For maturing or adult Chaco tarantulas, you’ll notice your spider molting once or twice a year, whereas a baby or juvenile Chaco can mold multiple times per year.

It depends on the growth rate, as the quicker and more frequently they grow (referring to young), the more times they’ll molt.

You can easily tell if your Chaco tarantula is molting, or about to start the process by taking notice of their recent behaviours, such as:

The usual timeframe for a tarantula to successfully finishing molting can range from 10 – minutes to 24 hours. Before the process starts, your Chaco can take days or even multiple weeks to prepare them to molt, so don’t worry too much if your spider has been showing a few of these signs for more than a week.

Important Tip: Do not disturb your Chaco tarantula until they have completely finished molting, as handling or feeding them frequently after can make them sick or cause death!

How to Tell the Gender of Chaco Golden Knee Tarantula?

Identifying the Gender of an Adult Chaco Golden Knee

Start by getting up nice and close to the legs of your Chaco. What you’re looking to identify is a “hook” which should be located underneath the mid-lower section of their leg.

If you do notice this hook, then you’ve most likely got a male Chaco tarantula on your hands! Females do not have this hook, as it’s actually used by males to assist them during mating.

Remember: You will only notice this hook on adult tarantulas and will fail to see this if your tarantula has not matured yet or is of course a female.

Identifying the Gender of a Young Chaco Golden Knee

Unfortunately, telling the gender of a young chaco tarantula can be more difficult, and will require you to wait until they have started their molting process.

Properly caring for a Chaco golden knee tarantula is extremely important for both the well-being of the creature and yourself!

These Chacos are extremely exotic creatures that aren’t for the faint of heart, and should only be made a pet if the owner has done extensive research about the animal prior.

Although they are observed to be bad and scary looking creatures, the Chaco golden knee is actually anything but that (for humans, anyway). They are relatively calm, laid-back creatures that hardly require social interaction.

If you’re looking to become a Chaco golden knee owner yourself, continue reading to learn the basics when caring for this type of creature and don’t forget to speak with other tarantula owners also.

For the most part, you’ll find the temperament of a Chaco golden knee tarantula to be very relaxed and laid-back.

Both male and female Chacos possess this temperament, with the female remaining gentle up until death. However, male Chacos can switch once they reach maturity, turning more aggressive.

Although tarantulas are low impact and non harmful creatures when it comes to humans, they can become aggressive (as mentioned above), by lodging their hairs from their exoskeleton into our skin if we’re in range.

This can cause blindness if lodged into our eyes or an unpleasant itchiness to our skin. You should also take extreme caution if your tarantula is left around any other common household pets, such as cats or dogs.

Choosing the right terrarium can be a “make it or break it” when it comes to the well-being of your tarantula.

As a basis, opt for purchasing a terrarium no smaller than 15-gallons. This should be the minimum size per one adult Chaco tarantula.

This is a perfect size, as they’re fairly large creatures that appreciate the space to roam around when they need to.

Food & Water (What to Eat, How Much to Feed, How Often to Feed)

The Chaco golden knee is a carnivore, mainly feeding on insects and other small animals if possible.

You can feed your tarantula either:

Chacos do not need a lot to be satisfied, thus feeding them once – twice a week with small portions is adequate and preferred compared to overfeeding.

Top Tip: If you create a feeding schedule, that will increase the chances of growth in younger Chacos.

Maintaining the right temperature for your Chaco can also play a part in the well-being of your tarantula, therefore, investing in a thermostat should be on your priority list when purchasing the basics.

On average, you should maintain a temperature of 65°F – 80°F, similar to the temperatures of their natural habitat.

Heating may or may not be necessary, depending on where you live. If you require heating tools for your tarantula’s terrarium, opt for heat pads or similar to place underneath their tank.

When it comes to humidity, you’ll need the inside of your Chacos tank hitting humidity levels of 55 – 65%.

The Chaco golden knee is a nocturnal terrestrial, thus you do not need to worry about investing in lighting for their terrarium.

Chacos build and live primarily inside their underground burrows during the day, and have excellent vision to see during the night. If you installed night lights in or around their terrarium, this would actually annoy and disturb the spider instead of helping them.

The reproduction process for Chaco golden knee tarantulas are fairly simple, with mating occurring in no specific time of the year, unlike reptiles or similar animals.

Once the female Chaco is ready, she’ll lay her eggs inside of a silk capsule, anywhere between 100 – 300 or more eggs!

link to Best Age to Breed a New Belgian Malinois

Whether you have a farm, a big mansion, or you’re just so into dogs you like to have more of them, one way or the other you’ll find yourself thinking about breeding them. Apart from designer...

Continue Reading
link to Belgian Malinois Intelligence: How Smart Are They?

Many people wonder about the Belgian Malinois. In particular they ask themselves whether the dog is actually smart or is it all a facade. But that’s not a fair question and it does injustice...