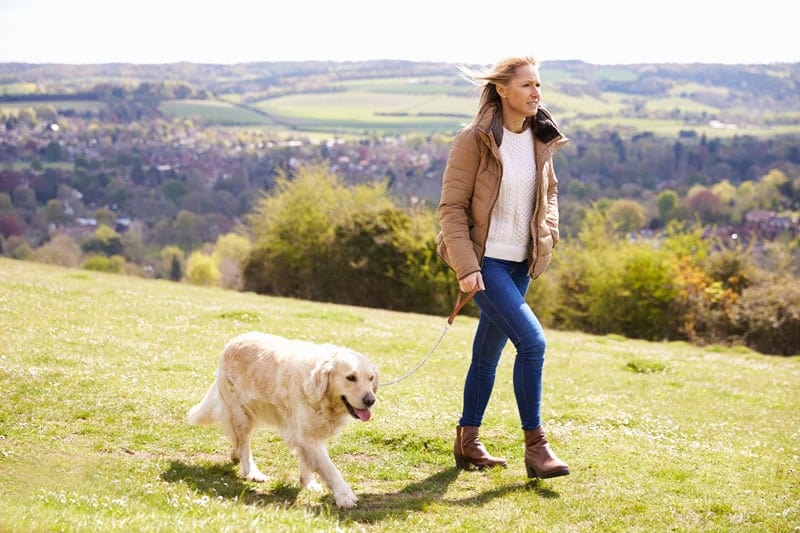 A Golden Retriever expecting puppies is usually a case for joy for their owners, or even as a source of some worry or anxieties, especially for new breeders or owners inexperienced in the whelping manner.

Caring for a pregnant Golden Retriever and ensuring the safe delivery of healthy puppies comes down to providing more food; ensuring adequate exercise; respecting the pet’s boundaries during its mood swings; and timely visits to the veterinarian.

Read on to learn the answers to some of the most common questions regarding the prenatal period as well as misconceptions involving diet and behavior.

The issue with feeding a pregnant retriever is that some owners believe they need to start changing the food their pet is eating or start supplementing their dog with more vitamins, calcium, etc.

This is ill-advised as excessive calcium can lead to a canine disease known as “milk fever.” Instead, provide the same kind of food she’s been eating, except with extra portions so your pet will eat as much as she wants of her own accord. Don’t feed her puppy food, but stick to the same food she’s been regularly eating.

Continue feeding the same but larger amounts of food as stated above.

She may not eat as much as usual, but again, provide the same amount of food so that she may eat her fill.

It is imperative that you do not give your pregnant Golden Retriever vaccinations, as it can introduce harmful pathogens to the puppies.

However, topical medications and preventions like flea or heartworm preventatives are safe to apply. If a vaccination is due during the gestation period, you’re going to have to wait to take her for her shot after she safely delivers the pups.

Exclude long walks or runs from your pregnant Golden Retriever’s workouts. Limit the distance as well as repetitions of a game of fetch to much shorter and less than usual in order to ensure a decent workout for the pet.

Preparing for the Birth (Whelping Box)

Most Golden Retrievers require little help with the birthing process. However, there will come the moment where you as the owner may assist in cutting off the umbilical cord during the third stage of whelping.

After the puppies have been birthed, do not separate the pups from the mother for at least 8, or even 10 weeks to ensure that they receive the proper social development and skills learned from interacting with their siblings and mother.

While mood will vary depending on the individual dog, as mentioned previously in this article above, changes in behavior can be perceived as sluggish, tired, depressed, aggressive to being reclusive.

She would be most welcome and receptive during the earliest stage of pregnancy and suddenly shift to being cold. Rest assured, your pet’s view towards you have not shifted- rather, she is being protective of her pups.

Take your pregnant retriever to the vet immediately under any signs of alarm such as disease or difficulty during labor. Your veterinarian will direct and assign the appropriate test for the corresponding gestation period of your Golden Retriever.

How Long is a Golden Retriever Pregnant for?

A Golden Retriever’s average gestation period is around two months, or 63 days, which can fluctuate depending on the pet’s environment and genetics, as well as stress level and health.

How Can I Tell if My Golden Retriever is Pregnant?

Perhaps your Golden Retriever had contact with a male dog recently, but you didn’t witness them during the…act. Or that you suspect that mating has occurred. If you deem ultrasound or x-ray to be potentially harmful to your pet, visible signs that can be observed without the aid of a machine that evince a pregnant dog include but are not limited to:

How Many Puppies Do Golden Retrievers Have?

Golden Retrievers can give birth to numbers ranging from 4 to 12 puppies per litter, with 8 being the average and usual number of puppies given birth.

Can a Golden Retriever Only Have One Puppy?

While it is unlikely, it is entirely possible that a Golden Retriever or any other dog breed have only one single pup in its litter,

However, in regards to the social health and development of these “singletons,” the pup may grow disadvantaged and inadequately equipped to interact with its fellow dogs as a consequence of having been raised as the single pup.

These can manifest in the pup later having trouble respecting boundaries of other dogs; how to healthily deal with their frustration, etc.

How Many Times Does a Dog Have to Mate to Get Pregnant?

While technically just one instance of mating can result in a pregnant female dog, dog semen is usually watery and therefore easy to leak out of the female’s reproductive tract. The chance for pregnancy diminishes, especially if the female begins sitting down or cleaning herself after the process.

Female dogs come under “pre-heat” during which her eggs would not yet be mature and her temperament may be cold, unreceptive or even aggressive to male dogs mounting her. Even if they do succeed in mounting her, it is unlikely that she would sire any pups.

Thus breeders usually have dogs mate all day (especially when she’s in heat) in order to ensure success through quantity, as well as to appeal to her fertile period.

What Age is Best to Breed a Golden Retriever?

Each individual dog will have to be evaluated for terms of health problems and issues before deciding upon the right time for breeding.

While a female Golden Retriever can go into heat 6-12 months of age and a male can breed as young as 6 months old, dogs should never be forced to breed at so young an age.

Usually a breeder will wait two or three of her heating cycles to pass before deciding it is an optimal time for a female Golden Retriever to breed, which is usually sometime after 24 months.

link to Do Chickens Need a Rooster to Lay Eggs? (10 Quick Facts)

Hens do not need a rooster to lay eggs. Hens are capable of laying unfertilized eggs without any help from a rooster, but no baby chicks will be developed or hatched. How is this possible without...

Continue Reading
link to Do All Goats Have Horns? (Male and Female) with Pictures

There more than two hundred breeds of goats in the world, ranging in size from the enormous Anglo-Nubian to the diminutive Nigerian dwarf. Some of the distinguishing factors between male and female...