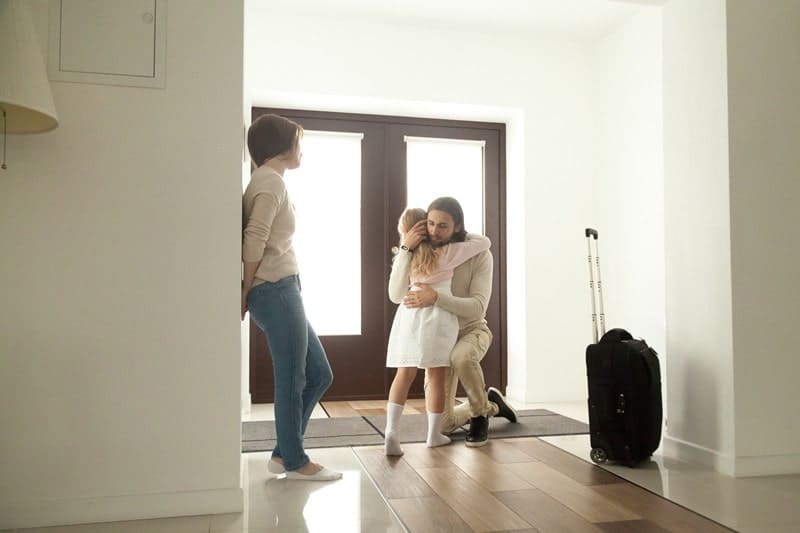 When it comes to obtaining child custody after a divorce, family law courts have historically sided with the mother more commonly then they have with the father. And while attitudes to child custody are beginning to shift towards granting both parents equal rights, many divorced dads still feel like they are being unfairly sidelined by a system that has traditionally put more emphasis on a mother’s legal rights than their own.

In this day and age then, can a father obtain sole custody of his child after a divorce? In many cases, yes, fathers can be granted full custody of their child, but this will depend on many factors such as the child’s relationship with the father and the father’s home circumstances, suitability etc. Because it’s in the child’s best interests to have both parents in their lives as much as possible, however, family courts will often decide to award joint custody to fathers, allowing them to share a 50/50 responsibility with the mother.

A recently divorced dad could be the most nurturing and reliable parent in the world (even the preferred parent in the eyes of his child), but an endless list of positive attributes will not help him win sole custody of his child alone. A divorced father will need to be prepared for the reality of a difficult custody battle, particularly if the mother has also filed for sole custody of the child. To find out how to obtain your 10 year old’s custody after divorce and what this might entail, read on…

In the wake of a divorce – particularly a bitter one that may have involved infidelity or deceit on your partner’s part – it is understandable for the injured party to feel as if sole custody of your child is somehow owed to you automatically, or at the very least that you deserve to be your child’s main caregiver, since your ex has set such a poor example for your child. Unfortunately, while courts may be sympathetic to your emotional plea, this is not how child custody is ultimately decided.

The aim of a family law court is to – wherever possible – keep the family unit intact and this means trying to award joint custody to both parents. If you are reading this as a father desperately hoping for full and sole custody of his 10 year old child, keep reading below. Understanding the difference between joint and full custody can help to answer your questions in regards to your rights as a father.

Compared to the prejudice divorced dads may have faced in decades gone by, obtaining full child custody today is no longer the near impossible task it once was. A court of law is not permitted to show any bias against fathers, so obtaining full custody of your child will simply come down to demonstrating that you are the most suitable parent in the eyes of the law – and this will be determined by the following factors:

Your relationship with your daughter – First and foremost, a judge needs to be confident that you and your daughter share not only a close and loving bond, but that you have proven to be there for her physically and emotionally. The courts will expect you to answer a set of questions such as the nature of your relationship before your divorce, the length and nature of past visitations and possibly other personal questions that could determine how invested you are in your daughter and her needs.

Your daughter’s relationship with her mother – Part of awarding one parent sole custody of their child is about getting the whole picture, so a judge will also need to know as much about the mother’s relationship with your daughter as needed. If your daughter’s mom is currently the main caregiver and there is evidence that this arrangement appears to be working, then a court will not be likely to interrupt this set-up – particularly if your child is settled in this routine.

However, current circumstances can be changed if the father can present evidence that the mother makes an unfit caregiver, i.e., if there is any evidence to suggest the child may be in danger due to the mother’s use of drugs or for reasons of mental illness that may put the child in a vulnerable position.

Proof of paternity – You should make sure that you are named as father on your daughter’s birth certificate. If the paternity of your daughter can’t be acknowledged on her birth certificate, the court will suggest conducting a paternity test to clarify this. It’s important that they can prove the child will be with a biological parent in any child custody outcome.

What Does Full/Sole Custody of My Child Look Like?

In its simplest form, sole legal custody means you will have the legal authority to make all major decisions for your daughter, and full custody rights fall under two categories: Legal and physical sole custody…

2. Sole physical custody – ‘Physical’ custody refers to the main location the child resides at, so this will be the home of the custodial parent. The non-custodial parent will have visitation rights.

Even in the case of winning sole custody of your daughter, you should be prepared for the fact that the mother may be awarded generous visitation rights and overnight stays with her, since this will be in the child’s best interests. If you are concerned that you and your ex may clash about visitation rights and other child custody arrangements, it may be helpful to attend co-parent counseling as this can help ease the transition for you and your child after divorce.

If your application for full custody of your daughter is denied, a joint custody arrangement is the next best outcome. While it may be disheartening to lose out on sole custody of your child at first, joint custody may gradually be looked upon as a positive, since it puts both parents in the same boat and best of all – it is beneficial to your daughter’s development and overall happiness if she gets to spend equal time with both parents.

What Does Joint Custody of My Child Look Like?

Joint legal custody essentially means both you and your ex have the legal authority over making major decisions for your child and this means knowing how to communicate effectively with each other to decide which form of education, healthcare, religion etc is in your child’s best interests. Like sole custody, joint child custody falls under the same two sections:

1. Joint legal custody – this essentially means that both parents or guardians have equal authority on making major decisions for the child, so in the event of any major school or health issues, these need to be acknowledged and discussed together. As above-mentioned, co-parent counseling can help if one or both parents are finding joint custody difficult.

Once your daughter becomes a teenager, this can change physical custody arrangements, since she will then be old enough to decide which residence she prefers to spend the majority of her time in and in some cases, she will also be able to determine the visitation rights of the non-custodial parent. To understand more about how joint custody arrangements may work for your family, consult as much free legal advice as you can on child custody before finding a lawyer that’s right for your interests.

While most family courts will try and conduct child custody matters in a similar manner, it can be useful to know that some states carry different laws and guidelines in regards to your child’s age. In Indiana, for example, family court laws specify that a child is able to tell the judge his or her preference for a custodial parent by age 11. So if you are wondering how your 10 year old daughter may affect your custodial rights, checking out the specific state laws is a good first step.

These state laws and guidelines typically exist to decide what the child’s ‘best interests’ may be based on their age and other factors such as their home life and previous relationship with each parent. Otherwise, your daughter’s age shouldn’t have too much impact on your specific custodial rights as a father, since a family court will be focused instead on your unique set of circumstances after divorce and the relationship you have with your ex (civil or otherwise). If you are dealing with a completely uncivil and toxic ex, read about how you can negotiate child custody with a narcissistic ex partner here.

What are My Visitation Rights as a Divorced Father?

If you are granted joint custody by a family law court instead of sole custody, you will be given generous visitation rights as the non-custodial parent and every measure will be made to ensure you see your daughter on a regular basis.

Supervised – if the courts decide that your circumstances warrant supervised visitation of your daughter, then another adult may be present every time you visit. In some cases, you may have the right to choose who fills this supervisory role such as a relative or close family friend. Otherwise, the courts will appoint a social worker who will supervise visitations with your daughter.

So what are my legal visitation rights?

How Can I Be a Great Divorced Dad to My Daughter?

Divorce is undeniably tough on fathers, but it can be even harder on your child if you allow it to. The most incredible thing you can do as a recently divorced dad is to make sure you are at your best in order to be the best dad you can be to your daughter. Showering kids with gifts and treats is only a short-term fix for the process of healing after a family separation, and sooner or later you need to take care of yourself to see the long-term benefits.

Psychologist Dr. Mark Borg Jr. notes that divorced dads have an unhealthy tendency to ignore their losses and focus on their kids which, while admirable, is dangerous “In order for kids to be able to grieve and mourn and move into their new lives they need to believe – and see – that their dads are okay.”

For years, small farms have been described as backward, inefficient, and unproductive, with some even regarding them as an obstacle in efforts to overcome economic constraints. However, this could...

Continue Reading
link to Do Cows Have Horns? (Explained, Why, Breeds and Facts)

Have you ever wondered if cows have horns? The cow horn (and whether or not it exists) is a widely discussed topic, but it’s not as clear-cut as it may seem - you can look out at a field of grazing...