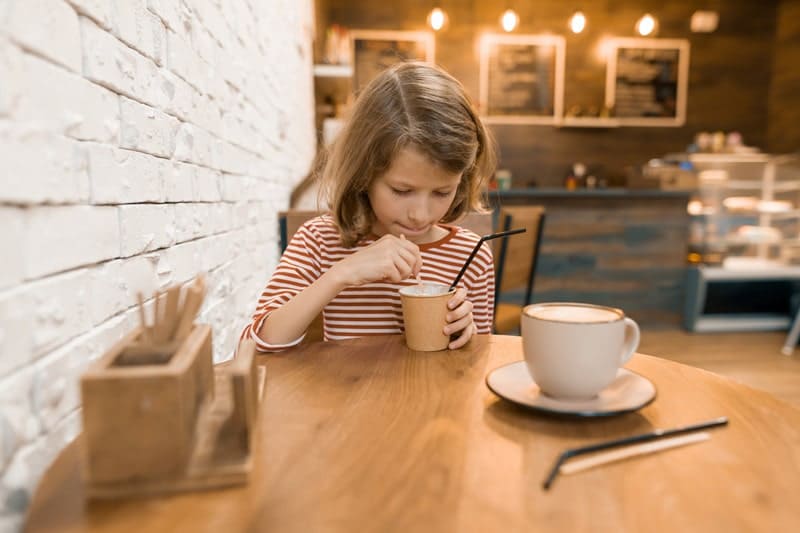 Your 10-year-old just came home from a friend’s house and told you they had a few energy drinks while they were there. As a parent, you’re rightfully concerned. Your child, however, tells you that it’s not a big deal. All their friends drink them afterschool. Still, you find yourself asking the question: can 10-year-old kids drink beverages containing caffeine? Should they?

While there are no real set guidelines around caffeine intake in kids, the American Academy of Pediatrics recommends children around 10 not drink too much of it. Caffeine is a stimulant, and it’s also a drug. When kids have too much caffeine, it can interfere with their sleep, affect their moods, and give them headaches. They can even go through full-on caffeine withdrawal symptoms and end up hospitalized in more serious instances.

In this article, we’ll discuss caffeine and the effects it can have on your kids’ health. We’ll also talk about what the most dangerous caffeinated drinks are and provide you with a list of healthier alternatives. If you’re a parent worried about your 10-year-old’s caffeine intake, this article should be a big help to you.

As we said, caffeine is as a stimulant, and more importantly, a drug. It’s defined this way because caffeine triggers the central nervous system. It makes adults more alert and provides a slight energy boost as well, at least temporarily. In children, the effects of caffeine are much different and often more negative. We’ll discuss those side effects in the next section, so keep reading.

The idea of caffeine boosting the energy levels of kids is just a myth. In most cases, caffeine simply masks feelings of being tired.

Caffeine also has zero nutritional value, and many caffeinated drinks are overloaded with sugars. That’s why there’s no real recommended safe level of caffeine for kids to consume. In fact, the American Academy of Pediatrics has recommended barring caffeine from being a part of a kid’s diet in any way.

Parents may not always be aware of the risks associated with caffeine intake in kids, but it’s important they catch themselves up. They also have to differentiate between what’s good for a grown adult and what’s good for a child.

For instance, caffeine has received quite a lot of positive press in recent years. There have been claims made about how it can boost weight loss, improve focus, and enhance memory. Drinks such as tea and coffee can also be rich with antioxidants, which some have claimed to have cardio-protective and anti-cancer properties.

Those benefits apply to adults, not children. As we’ve hinted at, the effects of caffeine look very different for kids than for their parents. Here are six things you need to know about caffeine and the effects it can have on your kid’s health.

Overconsumption of caffeine in kids can lead to abnormal behavior and changes in socialization, both of which can be jarring to you as a parent. According to one study from the American Psychological Association, caffeine can actually overstimulate the neurological systems of kids. It damages their attention span, which in turn harms their ability to participate in school, playtime, and the family environment.

Many products containing caffeine tend to have lots of sugar as well. That’s because caffeine has a naturally bitter taste that consumers wouldn’t prefer without all that sweet stuff.

Sugar is a source of empty calories which can cause kids to become overweight or even obese. The combination of caffeine and sugar can also trigger dependence or addiction in kids whose intake isn’t regulated.

3. No Feelings of Tiredness

Caffeine doesn’t actually boost the energy levels of kids, as we talked about before. It has even more insidious effects, though. One study from the National Institutes of Health shows caffeine can impede kids’ perception of being tired. This is due to caffeine stimulating vigilance and brain arousal. That can lead to unruly and dangerous behaviors later in life if left unchecked.

Overdoing it on the caffeine can begin to cause physical dependence over time, even in kids. This is according to a study published in the International Journal of Epidemiology. Kids who are hooked on caffeine may experience full-on symptoms of withdrawal for as many as 10 days after quitting soda, energy drinks, and other caffeinated beverages.

These symptoms can include the following:

Besides not feeling tired, too many caffeinated beverages can actively keep a child up into the night. Many kids who consume energy drinks are under the belief these beverages will boost energy and improve performance in school and on the sports field.

The truth of the matter is caffeine actually worsens kids’ performance due to fatigue. The National Institutes of Health study mentioned earlier reported that 90% of kids sampled got less than eight hours of sleep a night. Caffeine was the number-one cause of this sleeplessness.

No parent wants to see their child go to the hospital, but it can happen with too much caffeine. A report from the Drug Abuse Warning Network showed emergency room visits due to caffeine intake rose from 10,068 trips in 2007 to 20,783 visits in 2011.

It sadly gets worse. In 2012, the Food and Drug Administration launched an investigation into 13 deaths which were reportedly tied to 5-Hour Energy, as well as five deaths allegedly linked to Monster Energy. While the ages of those who died seems to have varied, it’s still a harrowing reminder of the negative impact of caffeine.

Which Drinks Are Most Dangerous?

Anything containing caffeine has the potential to be dangerous to kids, because the overall intake is the primary concern. Caffeine can be found in a growing number of foods and beverages, too, making it difficult to avoid.

While more traditional sources like sodas, coffee, and tea are still prevalent, other sources are emerging. These include energy drinks, ice cream, chocolates, and even caffeine pills. You can even find caffeinated lip balm in stores.

Energy drinks are most concerning for kids because these are heavily and aggressively marketed towards them. Energy drinks in particular seemingly make those who drink them more “cool”, with advertisers jumping on sports trends or pop culture to push their products. They also use the portrayal of successful, energized kids in their commercials along with overexaggerated cartoon characters.

Energy drinks contain as much as 250 milligrams of caffeine in each serving, and most are packaged with multiple servings in a container. This results in much larger caffeine doses when kids consume the entire package in one sitting. More than half of the calls to the National Poison Data System between 2010 and 2011 related to non-alcoholic energy drink ingestion involved kids under the age of six.

Five Great Alternatives to Caffeinated Drinks for Your Kids

As a parent, you need to be careful with the beverage choices your kids make. Caffeinated drinks pose a number of risks, as you now know. Energy drinks are among the worst culprits. When your kids need to have something to drink, there are many healthier alternatives they can choose.

Water is by far the healthiest way to keep kids hydrated. Offering your children water as their first option will teach them to see low-flavor, sugarless drinks as the primary way to satisfy their thirst. You can model this behavior by serving water with each meal and making sure your kids always have a bottle of water when on the go.

Coconut water can be considered nature’s version of Gatorade. It’s rich in electrolytes, especially potassium and magnesium. That makes coconut water a great option to keep your kids hydrated on camping trips, at sporting events, or just in general. Make sure you pick up a version with no added sugars if you decide to go this route.

A glass of milk can serve as a healthful post-exercise drink. Milk contains carbohydrates which help muscles regain energy as well as proteins for recovery. You can also opt for milk alternatives such as fortified soy beverages for those with an allergy or dairy intolerance. These also have vitamin D, calcium, and proteins. Try enriched rice and almond milk as well. These are lower in protein, but they’re not lacking in vitamin D and calcium. As with coconut water, go with a low-fat milk, unsweetened if you can.

Fruit juice can also serve as a viable alternative to caffeinated drinks, but this comes with a caution. Kids should only be drinking unsweetened 100% real fruit juice in limited quantities. Mix the fruit juice with sparkling water or make homemade smoothies for the occasional special treat. Add some chopped frozen or fresh fruit to a glass of water to put a fun spin on fruit juice as well.

While sports drinks like Gatorade don’t have the caffeine of energy drinks, they’re loaded with far too much sugar for kids. Luckily, you can come up with a do-it-yourself sports drink.

Start by combining a third of a cup of fruit juice with two-thirds of a cup of cold water. Finish by adding a slight pinch of salt to the drink. The natural sugar from the fruit juice combined with the salt will help your kid’s body absorb fluids.

Here are a few other quick points to keep in mind when it comes to your kids and what they drink:

Caffeine has become much more readily accessible to younger and younger kids in recent years. As a parent, it’s important to know the risks associated with overconsumption and talk about them with your 10-year-old child. Encourage them to drink healthier alternatives such as water, milk, or DIY sports drinks. Model good behaviors for your kids to follow, and don’t ignore any warning signs which may crop up. Your kids are sure to thank you for it later on. They just don’t know it yet.