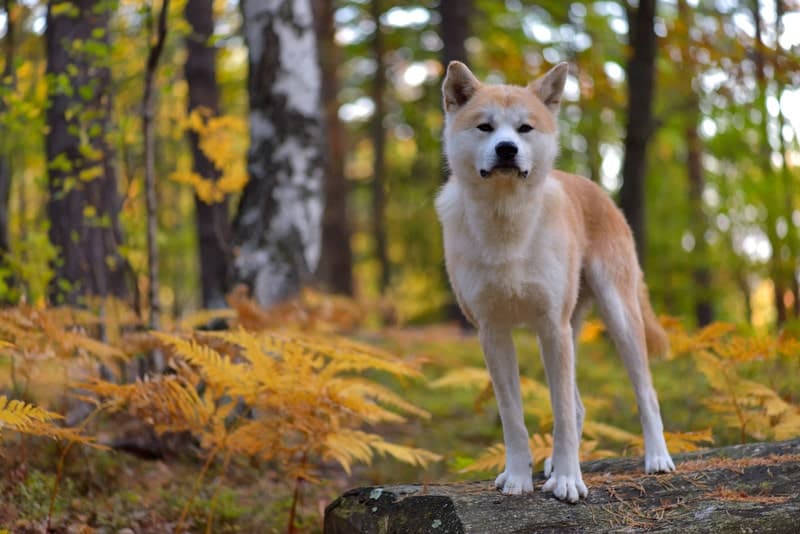 The Akita (Also known as Japanese Akita) is a bold, determined, and faithful canine that not only respects their owners but will do anything to protect them from potential harm. The Intelligence of Akitas are often overlooked when compared to other breeds, however, they don’t go unnoticed!

Although they’re ranked as #53 within Dog IQ, the intelligence of an Akita features striking abilities such as utmost loyalty towards their owner, possesses staggering instinctive senses when guarding and displays astonishing obedience and adaptive capability when properly trained.

Despite their intolerable and sometimes aggressive nature, it’s no doubt that the Akita breed possesses their intelligence to those closest to them, and can be considered lucky to those who are close enough to own and train one themselves.

When you look at “Intelligence in Dogs”, you’re observing many things such as a dog’s ability to possess certain types of behaviors/knowledge which can determine where they sit on the scale to other breeds of dogs.

Intelligence in dogs is split into different factors, such as:

The big factor to consider with intelligence in canines is their upbringing and the surrounding environment. Similar to children, if a child has been brought up with any form of neglect or poor education, it’s less likely for them to succeed compared to others who have had structure and quality education.

You can use this exact analysis with dogs, because if you compare a dog with an upbringing of neglect and an incompetent owner vs. a loving environment and a competent owner; Regardless of the breed, only one of them will be likely to succeed further compared to the other.

Instinctive intelligence has everything to do with a canines ability to carry out what they were originally bred to do, in conjunction with their mental ability to be able to reason and communicate effectively which will determine physical actions.

Obedience intelligence is slightly more difficult to assess, as upbringing and external influences can play a part in the obedience of a canine, however, for the most part, this is assessed on a dog’s capability and willingness to learn.

The Akita dog was originally bred as a hunter dog throughout precipitous regions of Japan, to assist owners in their killing of wild animals. The assistance of these dogs dates back to World War ll.

Although there are two different strains of Akita dogs (The Japanese Akita and The American Akita), originally, these dogs possessed an astute ability to hunt wild bears, deer, and boars whilst keeping them grounded until their owner was able to kill them.

During a time that was difficult in Japan, these Akita dogs were highly sought after throughout Japan and their dominant, obedient, savage and strong character traits were desirable to have in a canine as they could be useful for not only hunting but dogfighting also.

Why are Akitas Known as Less Intelligent?

If you’re comparing a modern breed Akitas intelligence to a German Shepherd or Collie, then they’re no match to either of them. There are a few reasons why Akitas are less intelligent, however, this does not mean they are NOT intelligent.

Although the Akita is a fierce, tenacious, and bold breed, they are also known to be stubborn, aggressive and extremely hard to tame (for beginners or first time Akita owners).

For this reason alone, you can see why Akitas are known to be less intelligent than other dogs such as the German Shepherd or Border Collie, as both of these animals are known to be obedient, tame and extremely easy to train! (Which is why they’re often used as service dogs).

How Do We Measure Dog Intelligence?

Dog intelligence can be measured through a variety of tests that identify certain IQ levels within different areas such as adaptivity, communication, emotional, etc. Depending on the score of each dog and each test, can determine where they sit on the scale of dog intelligence.

Below are links to websites that provide free dog IQ Tests you can try:

How Smart Can You Expect Your Akita to Be?

Whether you’re a soon-to-be Akita owner, or you’re simply curious about an Akita’s IQ, you can expect your Akita to be a fairly smart dog, but only if they’re properly handled, cared for and trained as a pup. The Akita breed ranks as #53 for Dog IQ, but this is not to say that they aren’t completely incompetent animals.

Due to an Akitas nature of defense, staunch and sometimes problematic demeanor, it can be difficult training an Akita, especially for first-time Akita owners. They are dogs willing to learn, but ONLY on their terms (which coincides with their stubborn personality) and is a personality trait which is rare to find in higher IQ dogs such as German Shepherds or Border Collies.

If, however, an Akita has been cared for in a loving, firm and intelligent household with adequate dog training installed since a pup, an Akita can indeed grow up to be a very smart animal.

History of the Akitas

The Akita dog is a member of the Spitz family, originally a native dog to Japan. These canines were originally bred to assist hunters in the capture wild animals such as bears, deer, and boars until hunters were able to kill the wild animals themselves.

Throughout World War ll in Japan, the Akita breed began to lose distinctive traits due to them being crossbred with German Shepherds. Their ears become floppy and their tails became straight (instead of curled), which wasn’t liked by the Japanese at the time.

In an attempt to preserve the breed of Akitas, breeders began to crossbreed Akitas with native Japanese dogs, Matagi and Hokkaido-Inu which began to restore the Akitas distinctive traits and characteristics. American Akitas are known to come from the restoration of the native Japanese Akita breed and isn’t considered to be a “True Akita” by their standards.

During the end of World War ll, American soldiers fell in love with the Akita breed and imported them back to the United States on their journey home. It wasn’t without a near-brink extinction prior, that these loveable Akitas may not be here in America with us now.

Although the American Akita was imported around 1950, the American Kennel Club did not recognize the Akita dog as a working dog nor did they approve their standard until 1970.

In the 1980s, the Akita became widely popular and highly sought after breed of dog to own and was imported in not only the United States but the UK, Australia, and New Zealand also.

Here are a few of the Best Akita Intelligence Features:

Can Akita Intelligence be Improved?

Akita intelligence can be improved (or maintained), but only if the Akitas owner possesses the ability to properly train and tame their dog in conjunction with a suitable upbringing and external environment that’s loving, positive, strict, yet caring.

How to Train Your Akita?

Training an Akita can sometimes be a stressful, long-lasting, tiring process, however, the results are wonderful and can truly assist both yourself and your canine in their learning development for the future!

Implement the use of these 5 basic commands: “Sit, Stand, Come, Stop, Quiet”.

Familiarization, repetition, and perseverance will be needed from you when implementing these commands, as well as actions that follow.

When it’s the afternoon, your dog is slightly exhausted and is starting to get a bit hungry, grab a delicious treat and ask your dog to “Sit”.

Place your hand on their lower back and gently push it downwards as you repeat the word “Sit”.

Follow by rewarding your dog with a treat (regardless if you had to push them down or not). This will work as an incentive for this behavior.

Continue to do this with your dog multiple times a day, every day for weeks, and eventually, your dog will understand both the command and action that goes with it.

Remember: It takes a minimum of 4 – 12 weeks for your dog to become trained in commands, and that’s considering your practicing and implementing this strategy multiple times a day, every day, and every week until they understand.

Here are Some of My Favorite Pets Products

Thank you for reading this post. I hope you found it helpful as you raise your pet. Here are some products i use as a pet owner that I hope you’ll also find helpful.

, they offer flea and tick treatments, collars, flea shampoos, oral capsules. For dogs, flea and tick infestation is deadly and may cause severe diseases if not treated regularly.

Skin & Coat Chews provide a variety of ingredients, vitamins, and minerals that will help a dog with their skin and coat, many breeds have chronic skin conditions that can create stress and frustration in their life when it has not been treated properly. Free Shipping on all orders at discounted prices.