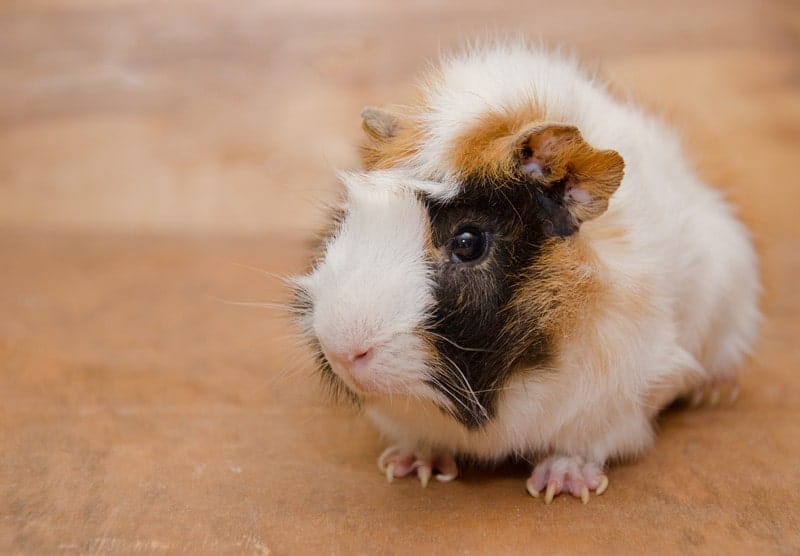 It can be quite tempting to purchase a pet guinea pig on impulse – after all, they have several appealing qualities; they are small, personable, seemingly easy to take care of, and gentle. However, what most people fail to understand is that these social creatures often need some special care to give them the quality of life they need.

They are great pet options because they look cute and eagerly show affection. When selecting an Abyssinian guinea pig, you want to go for an animal that appears alert, healthy, and plump.

It is important to have the necessary information on how to care for them so that they are comfortable and happy with you. A few things you need to keep in mind if you are considering getting an Abyssinian guinea pig.

Under favorable circumstances, an Abyssinian guinea pig has an average lifespan of 5-6 years, although some may even live longer. The life span of a guinea pig is influenced by a variety of factors such as diet, genetics, and environment.

Female Abyssinian guinea pigs, referred to as sows, have gestation periods of around 59-72 days. They can give birth to anywhere from one to seven pups, but the average litter size is three or four pups. Newborn Abyssinian guinea pigs are usually covered in fur and have up to 20 teeth at birth.

At 3 weeks, the pups are weaned and within 9 months to a year, they reach their full weight and size and become adults. While guinea pigs may exhibit a variety of signs that indicate aging, the most common include reduced energy levels, weight loss, and more frequent weight loss.

As previously mentioned, there are a variety of factors that impact the life span of an Abyssinian guinea pig:

As with all species, genetics plays a significant role in the lifespan of an Abyssinian guinea pig. Although there is no way you can test to determine if your guinea pig has inherited better genes for longevity, you may be able to get clues from his/her family tree if you can access it.

An Abyssinian guinea pig that has grandparents and parents who lived a long life might also live longer or inherit specific genes that affect their life span favorably.

Inbreeding to preserve a pedigree often leads to the loss in vigor and quality, referred to as inbreeding depression. Introducing variation to a gene pool increases health and longevity, with hybrid Abyssinian guinea pigs more likely to live longer on average.

What Abyssinian guinea pigs eat as well as their weight can also influence how long they live. It is important to provide the appropriate types of food as well as ensure that the amount is not too much or too little.

In addition to enjoying mental stimulation, Abyssinian guinea pigs are also very sociable. As a result, long periods of boredom and loneliness can prove to be very stressful for them, consequently affecting their long term health.

Loneliness or boredom often results in abnormal behavior in Abyssinian guinea pigs, which may include chewing their skin or fur, leading to the development of wounds that make a guinea pig more susceptible to infection.

Abyssinian guinea pigs with high stress levels also release more cortisol. Prolonged elevated levels of this chemical places a strain on the body functions of the Abyssinian pig, including the immune system and the heart. As a result, a bored or lonely Abyssinian guinea pig is more likely to wear out faster.

Guinea pigs are highly susceptible to developing urinary stones, with symptoms such as difficulty urinating and anorexia, among others. If left untreated, urinary stones could be life-threatening. Hereditary illnesses are also common, so it is important to check with a breeder to ensure that there are minimal health issues you need to be concerned about.

Like with any other guinea pig, Abyssinian guinea pigs can develop scurvy if Vitamin C is not provided in adequate amounts in their diet. Abyssinian guinea pigs as a breed have an increased risk of developing ocular diseases, and they also have a higher likelihood to develop diabetes mellitus, cataracts and ovarian cysts in females.

As with any other animal species, the size of an Abyssinian guinea pig can vary depending on several factors, including birth order, gender, age, diet, lifestyle, genetics, and overall health. An Abyssinian’s guinea pig’s size consists of its weight, length, width, and height, but in most cases, only the weight and length are noted.

There is a distinct difference between the average weights of male Abyssinian guinea pigs and female ones. The weight of a female adult guinea pig generally ranges between 1.5 and 2 pounds, whereas that of a male adult is higher, generally ranging between 2 and 2.6 pounds.

A fully grown Abyssinian pig can range anywhere from 8 to 12 inches in size depending on diet, litter size, gender, birth order, and overall health.

Abyssinian guinea pigs are one of the friendliest and most active breeds of guinea pigs. They are especially upbeat when they have someone to play with and somewhere to play. They are known to be affectionate and outgoing, and they enjoy being doted on by their owners. With proper care and training, Abyssinian guinea pigs can become very friendly and loving pets.

Abyssinian guinea pigs relish spending time with humans, with many of them enjoying resting on the laps of their owners. They are also very friendly with other breeds of guinea pigs, interacting with them readily. It is recommended that you get your Abyssinian guinea pig a companion to avert loneliness and boredom if you can.

How Much Does an Abyssinian Guinea Pig Cost?

If that is not an option, expect to pay any amount ranging from $15 to $75 for this breed of guinea pig. Keep in mind that prices will range depending on where you live as where you plan to acquire it. Most of the stores found in the Midwest tend to sell Abyssinian guinea pigs for around $35. If you are lucky, you may come across breeders that sell them for $10-15.

Other than the initial purchase price, it is also important to take into consideration the cost of caring for an Abyssinian guinea pig. On average, the initial setup cost will set you back around $100-200. The initial setup typically involves buying a cage, hay, pellets, a water bottle, bedding, feed bowl, toys, comb or brush, vitamin C supplements, and a house or structure to hide in.

As for the maintenance costs, consider the cost of food that needs to be bought regularly, toys and accessories that have to be replaced, and vet visits, among other expenses.

They have a short face, a broad head, and a long body. Their ears are petal-shaped and droop towards the ground. In some cases, you will even find an Abyssinian guinea pig that has a small mustache around their nose.

You won’t find any smooth or flat spots on the coats of an Abyssinian guinea pig. Instead, they are known for their straight and coarse hair that stands up to a height of 1.5 inches all over their bodies. Their fur curls around in “rosette” patterns, and you will often find a ridge of fur that meets from different directions in the middle of their bodies.

Abyssinian guinea pigs generally have 6-8 rosettes, although show quality Abyssinians typically have 8-10 rosettes that appear in pairs on their shoulders, rump, hips, back, and along the length of their body.

Abyssinian guinea pigs come in single color varieties, as well as a few color mixes. Some of the most common colors you will come across include roan, brindle, solid red, black, white, and tortoiseshell, among others.

How Do You Brush an Abyssinian Guinea Pig?

As previously mentioned, the fur of an Abyssinian guinea pig is tufted, which means that it needs quite a bit of maintenance to prevent tangling. They require regular combing, and you can use a soft brush or an old toothbrush. They enjoy the feeling of grooming, so you don’t have to worry about them squirming or getting uncomfortable as you brush them.

That said, you don’t have to brush your Abyssinian for hours as the only area where they are likely to get knots in their fur is on their rear which is prone to matting as a result of compacted droppings. By brushing this area, you will significantly reduce the risk of fungal infections occurring.

As with other guinea pigs that have longer fur, higher temperatures may pose a problem for Abyssinian guinea pigs as they are more likely to get stinky due to the heat. In such cases, consider bathing your guinea pig. Use a very mild shampoo and completely avoid conditioners or leave-in products Abyssinians are capable of cleaning themselves.

Guinea pigs, in general, are not particularly fond of baths, so to make your Abyssinian more comfortable, hold him/her gently In your hand during a bath after the bath, provide a warm and quiet space for them to air—dry and then use a soft brush to remove any loose hairs.

As the hair of an Abyssinian guinea pig continues to grow, it can start adhering to their urine, fecal material, and their litter. Your Abyssinian’s bedding might also get tangled up in the long hair. To prevent this, try to gently trim the fur or ask your vet to help you.

Abyssinian guinea pigs are herbivores. A quality diet should include hay, vegetables, pellets, and fruits. Most guinea pigs are partial to leafy vegetables such as lettuce (specifically green leaf lettuce or romaine) and carrot tops.

Other vegetables, as well as small amounts of fruits, can also be provided. Any leftovers should be removed after a few hours to maintain hygiene. High-quality grass hay should be provided at all times.

You can find guinea pig pellets at your local pet store. Always go for pellets that are low in corn and free of animal byproducts. For young guinea pigs, pellets that have a high alfalfa content are the most suitable, whereas, for fully grown guinea pigs, you will want to provide timothy-based pellets.

Since guinea pigs can’t synthesize vitamin C, ensure that you provide your Abyssinian with this vitamin in its diet to prevent scurvy. You can supply it through providing fresh fruits and vegetables that contain high levels of Vitamin C or look for pellets that contain this vitamin.

How Big is the Cage?

When it comes to housing, the needs of Abyssinian guinea pigs is not different from that of other guinea pigs. They require plenty of space to move around, as well as a place where they can hide when the need arises. It is also important for their cages to be smooth to prevent the risk of developing foot problems.

At the bare minimum, a single Abyssinian should have a cage that is no smaller than 2 square feet, although it is generally recommended to go for at least 7.5 square feet of space as a larger area is more ideal.

link to How Big Are Sewing Machines? (Helpful Guide for Beginners)

Sewing machines come in mini, standard, full size, and whopping industrial sizes. If you’re reading this you’re likely curious about the size of a standard household hobby machine or mini...

Continue Reading
link to How Much Electricity Does a Sewing Machine Use? (for Beginners)

Unless you prefer to go old school and hand sew with an antique machine, your contemporary electric sewing machine is going to use some power, and if this is your first purchase, you may be wondering...